A few new year’s resolutions for all the perfect Christians… 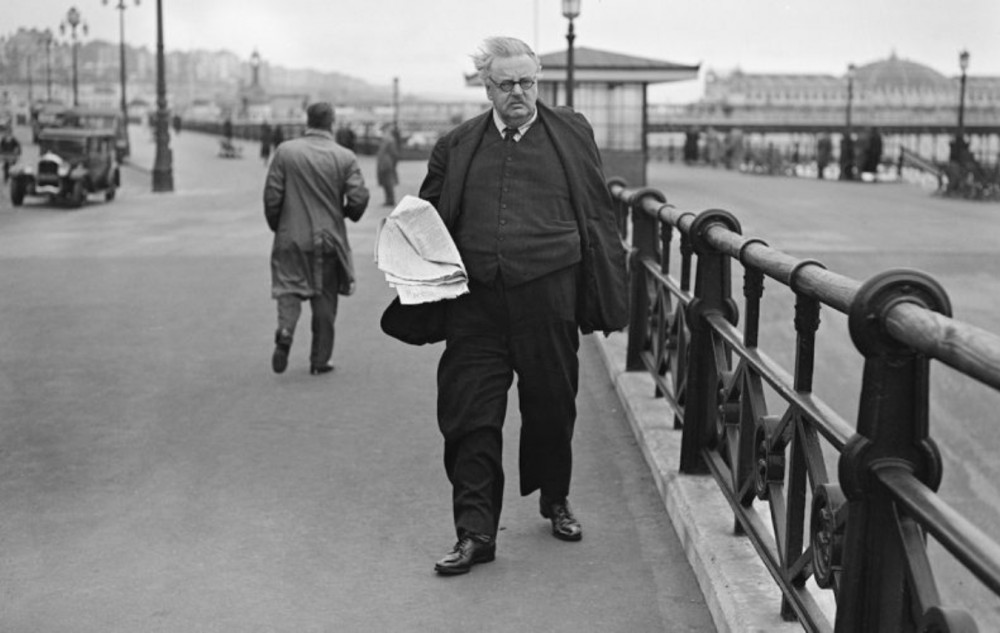 Nearly all the wisdom we possess, that is to say, true and sound wisdom, consists of two parts: the knowledge of God and of ourselves. (the first words of Calvin’s Institutes)

Attached to the end of G. K. Chesterton’s The Tyranny of Evil are a series of “letters to a Garibaldian.” This excerpt is the very end of the letter which is the very end of the book, itself. I’ve read and reread this text many times for its wonderful self-disclosure and humility—both nationally and individually. Also for its forthright acknowledgements and opposition to the sins of another race.

The context is Chesterton voicing his principled opposition to the natural pride of the German. The lead-up to the Great War is the context.

Be warned. Like President Trump speaking of “shithole” countries in the Oval Office this week, Chesterton insults others in the most insulting way. Unlike President Trump, sophisticated Christians with college degrees know that’s now verboten. But be tolerant keeping in mind that, whatever horror you have at President Trump occupying the White House, Chesterton was Roman Catholic and he wrote long before we had retreated to man-caves to engage in our filthy habits of generalizations, insults, confessions, arguments, and tobacco.

The North Teuton …does not laugh at himself. He does not want to kick himself. He does not, like most of us, repent—or occasionally even repent of repenting. He does not read his own works and find them much worse or much better than he had expected. He does not feel a faint irrational sense of debauch, after even divine pleasures of this life. Watch him at a German restaurant, and you will satisfy yourself that he does not. In short, both in the most scientific and in the most casual sense of the word, he does not know what it is to have a temper. He does not bend and fly back like steel; he sticks out, like wood. In this he differs from any nation I have known, from your nation and mine, from the French, the Spanish, the Scotch, the Welsh and the Irish. Bad luck never braces him as it does us. Good luck never frightens him as it does us.

…Above all, the Prussian does not feel annoyed, as I do, when foreigners praise his country for all the wrong reasons. The Prussian will allow you to praise him for any reasons, for any length of time, for any eternity of folly; he is there to be praised. Probably he is proud of this; probably he thinks he has a good digestion, because the poison of praise does not make him sick. He thinks the absence of such doubt, or self-knowledge, makes for composure, grandeur, a colossal calm, a superior race—in short, the whole claim of the Teutons to be the highest spiritual product of Nature and Evolution.

I implore you to keep out of the hands of this Fool the quarrel of the great saints and of the great blasphemers. He will do to religion what he will do to art; mix up all the colours on your palette into the colour of mud: and then say that only the purified eyes of Teutons can see that it is pure white. The other day the Director of Museums in Berlin was said to be setting about the creation of a new kind of Art: German Art. Philosophers and men of science were at the same time directed to meet round the table and found a new Religion: German Religion. How can such people appreciate art; how can they appreciate religion—nay, how can they appreciate irreligion? How does one invent a message? How does one create a Creator? Is it not the plain meaning of the Gospel that it is good news? And is it not the plain meaning of good news that it must come from outside oneself? Otherwise I could make myself happy this moment, by inventing an enormous victory in Flanders. And I suppose (now I come to think of it) that the Germans do.

There has always been something common to civilised men, whether they called it being merely a citizen; or being merely a sinner. There has always been something which your ancestors called Verecundia; which is at once humility and dignity. Whatever our faults, we do not do exactly as the Prussians do. We do not bellow day and night to draw attention to our own stern silence. We do not praise ourselves solely because nobody else will praise us. I, for one, say at the end of these letters, as I said at the beginning; that in these international matters I have often differed from my countrymen; I have often differed from myself. I shall not claim the completeness of this silly creature we discuss. I shall not answer his boasts with boasts; but with blows.

My front-door is beaten in and broken down suddenly. I see nothing outside, except a sort of smiling, straw-haired commercial traveller with a notebook open, who says, “Excuse me, I am a faultless being, I have persuaded Poland; I can count on my respectful Allies in Alsace. I am simply loved in Lorraine. Quae reggio in terris … What place is there on earth where the name of Prussia is not the signal for hopeful prayers and joyful dances? I am that German who has civilised Belgium; and delicately trimmed the frontiers of Denmark. And I may tell you, with the fulness of conviction, that I have never failed, and shall never fail in anything. Permit me, therefore, to bless your house by the passage of my beautiful boots; that I may burgle the house next door.”

And then something European that is prouder than pride will rise up in me; and I shall answer:—

“I am that Englishman who has tortured Ireland, who has been tortured by South Africa; who knows all his mistakes, who is heavy with all his sins.

And he tells you, Faultless Being, with a truth as deep as his own guilt, and as deathless as his own remembrance, that you shall not pass this way.”

Let me ask: what is the meaning of Reformation doctrine if it has left Protestant pastors and elders so thin-skinned and insecure as to no longer be capable of confessing our sins and the sins of our nations?

Do you remember the Apostle Paul’s takedown of the Cretans:

One of themselves, a prophet of their own, said, “Cretans are always liars, evil beasts, lazy gluttons.” This testimony is true. For this reason reprove them severely so that they may be sound in the faith… (Titus 1:12, 13)

We may still claim to hold to the doctrine of total depravity but we have lost it. And this is because, in Chesterton’s words, we have failed to protect our quarrels. With others and with ourselves.

This is a tragic state. We must reclaim our arguments, and that will require us reclaiming our willingness to make and defend our generalizations. Too, we must reclaim our ability to laugh at ourselves. We must have the Christian faith to insult others and submit to being insulted ourselves. This is a mandatory part of the curriculum of sanctification.

As we begin this new year, I think we Reformed men should take a lesson from Chesterton. First, let’s resolve to tell some racial jokes. About our own race. About other races. Second, let’s study the character defects of Americans. We have lots of them and it’s about time we see them as well as the rest of the world does. Third, let’s strive to attain Chesterton’s adiposity. I can’t  help but think that it’s a large part of the explanation for his liberal confessions of sin. Being thin is faultless, so let’s be done with our pristine self-worship and live a little. Let’s get fat!

Finally, so that we may learn to confess our sins, let’s determine to sit under a pastor who shoves our nose in them. What good is a hound dog who can’t tree a coon and bark?