The fog of life… 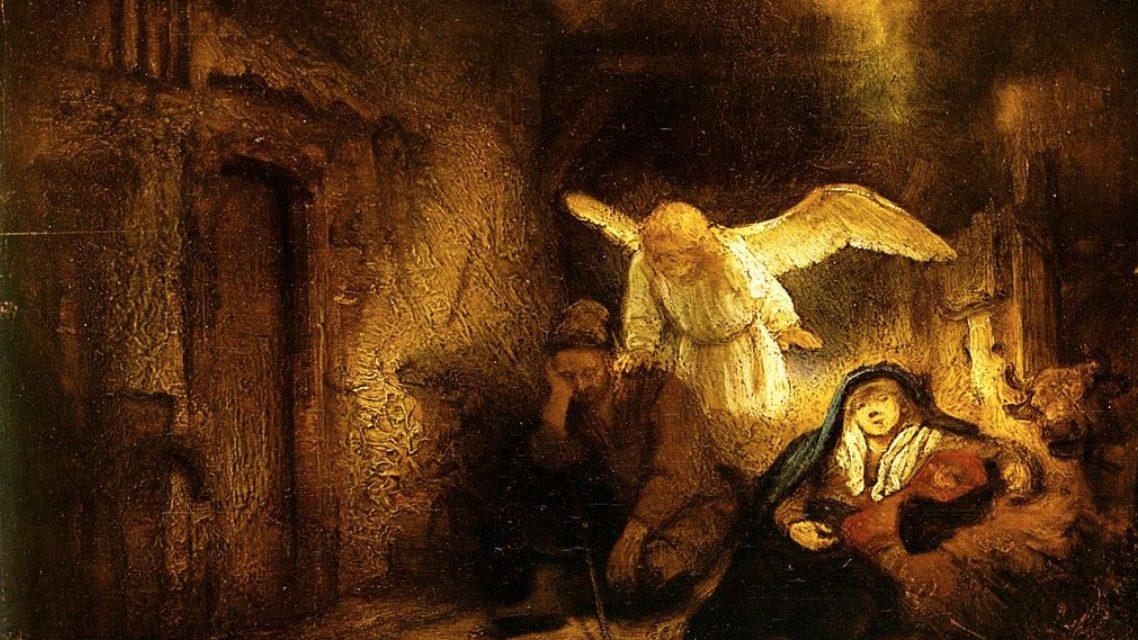 As I look out our windows just now, everything’s obscured. Mid-winter fog hovers over the ground. Thick with moisture, the haze limits vision to a hundred feet or two, and for all I know the whole earth has died and Mary Lee and I alone remain. I hear her at her sewing machine and know she’s happy, there. Almost nothing gives me more joy than her sewing. I’ll take one dress for a three-year-old granddaughter over Michelangelo’s Sistine Chapel.

Reading the world’s most dramatic story (save the Passion of our Lord) of Jacob and his beloved son Joseph this morning, I feel the fog as a metaphor for the seeing-dimly that pervades all the men and women who lived and wept and ate and feared and died in this history. What did Potiphar know of his wife and his life? Why did Pharaoh even exist? How could anyone call Jacob an active participant in the happenings? Even Joseph, or maybe especially Joseph, is revealed as an almost passive participant in his life.

No one anywhere at anytime in this story could have known what was going on or what it would lead to. Isn’t that true of all of our lives? Do we know what tomorrow will bring? Do we know which of our children will live and which die? Do we know our own years, months, or days? Because it is a habit of speaking, we tell each other “today I will do this” and “tomorrow that,” but God Only knows what today brings, let alone tomorrow.

We think we are masters of our destiny, but we’re not. Joseph didn’t make up his dreams. He may have chosen to brag about them (twice!) to his brothers, but God was their author and it pleased God to bring them to pass. Who could have ever in a thousand years have made up those dreams and their fulfillment?

Whenever you read the Bible, things stick out. Things knock you on the head. Things give you a concussion. For some reason, the Bible is that kind of book.

This morning, what banged my head was Joseph’s explanation to his brothers of their murderous plot that put him in the hole, sold him to the Midianites, and dipped his many-colored cloak in blood and deposited it in the lap of his father howling with grief. The brothers were shaking in their terror. Here was this same brother, the second most powerful man on earth, and he held their lives in his hands.

What did Joseph say to calm them?

The fog is thick outside. It’s hard to see. Things are obscured. Armies might be marching up my driveway. Cancer might be spreading through my body. Sodomites might be breaking down my neighbor’s door because he refused to give them his teenage son. Churches are splitting. Heroes have become cowards and are now weak and conniving. Mothers are killing their unborn children. America is no longer the land of the free or the home of the brave.

This is how it seems to us, but a famine is coming and Jacob and his family must be protected. Then four centuries of waiting for the cup of the Canaanites’ wickedness to be filled up before the exodus. Then forty years in the wilderness before inheriting the Promised Land. Then many centuries of “O come, o come Emmanuel, and ransom captive Israel, who mourns in lonely exile here, until the Son of God appear.”

What we do now and in an hour matters. We are never pawns in the hand of God. His secondary causes are still causes and no one—especially Potiphar’s wife and her #MeToo lie—ever loses their moral agency and is able to face the coming judgment without trembling. Jacob’s brothers each stand before the Holy God and answer for their crimes against their brother—but worse, their father. Jacob himself answers for his crimes against his brother—but worse, his father Isaac.

Always through everything, though, God reigns and His will is done. Inexorably. Perfectly. Wonderfully.

You and I, our wives and children, our pastors and elders and deacons and bosses and neighbors; all of us act and pray and cry and laugh and shout joyfully and worship zealously. God is pleased by our worship even though, and maybe precisely because, He foreordained we would do so and it was for His Own glory. Not ours, but His.

Is it an irritation to you that God ordains all things for His Own glory? Do you really think He is impotent in the face of evil? Are you so dim-witted as to argue that God saw to it that Joseph was elevated to the right hand of Pharaoh but not that God placed Joseph in the pit awaiting murder or the Midianites? That the famine was something God “allowed” while the dreams Joseph interpreted, as well as Joseph’s interpretations of those dreams, were things that God inspired? That God caused?

In this life, our best vision is through a glass darkly. Our best inspirations are only the smallest hints of truth and wisdom and and beauty and love.

But the day came when Joseph and his brothers, and aged Jacob, had their eyes opened and praised God for what He had done. All He had done! All HE had done. Yes, the joyful reunion of father and son. But also the bloody coat of many colors and the lies of Potiphar’s wife and the forgetfulness of the cupbearer and the years in the dungeon.

And the famine over all the earth.

Our God reigns. Let us not be fatalists or stoics—or even more pathetically, Arminians—about it. Let us rejoice and be glad!

For this God, the Only God, is love.