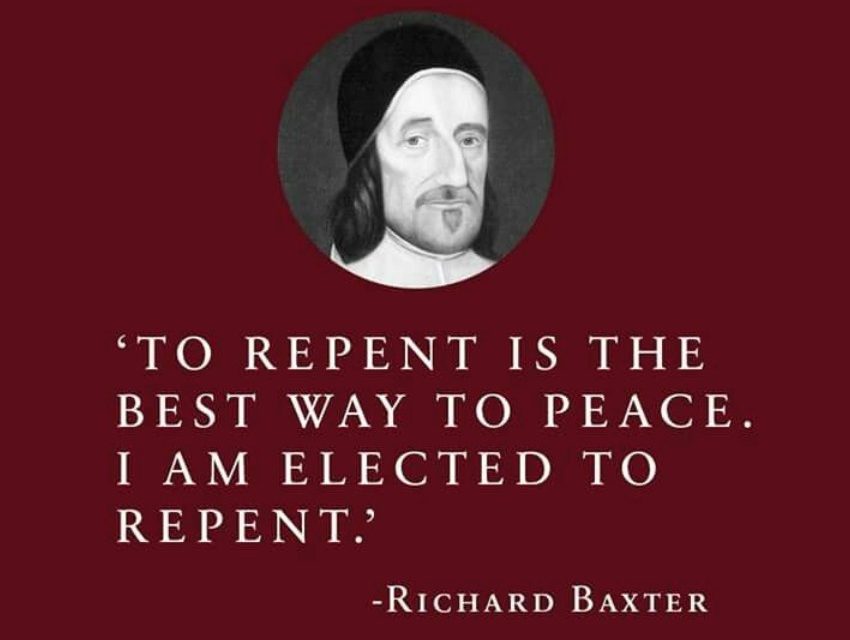 One of the most treasured books in my library is a MDCLXXXV first edition of Richard Baxter’s paraphrase of the New Testament. Baxter was a Puritan pastor who wrote the paraphrase for himself, but published it for others, as he himself put it.1 He wanted people to have its help in leading their family’s worship. In the introduction, he pleads with fathers to be faithful in this work: “Hear me, as if I begged it of you, with tears on my knees.”2 He hoped his paraphrase would be useful to such fathers as well as poorer pastors who could not afford large and expensive commentaries.

In 1684 during the reign of James II, Baxter’s paraphrase was accused of containing scandalous and seditious things against the government and Baxter was charged with eight counts of sedition. Imprisoned on these charges for two years, the King finally intervened, personally, and Baxter was released. Five years later, in 1691, Baxter died.

Back in 2011, John Piper tweeted about Baxter’s imprisonment: “Richard Baxter paraphrased the New Testament in 1684, for which he was jailed. Taken any Bible-exalting risks lately?”

Of course, Baxter wasn’t imprisoned merely because he “paraphrased the Bible.” These were the eight specific charges, in their totality. Note Baxter’s comments and pull his exhortations into our present world.

Charge of Sedition No. 1:

NOTE: Iſ any shall presume to break the least of these commands, because it is a little one, and teach men so to do, he shall be viliﬁed as he viliﬁed God’s law, and not thought fit for a place in the kingdom oſ the Messiah: but he shall be there greatest, that is most exact in doing and teaching all the law oſ God. Note, Are not those preachers and prelates then the lowest and basest, that preach and tread down Christian love oſ all that dissent from any of their presumptions, and so preach down not the least, but the great command?

Charge of Sedition No. 2:

Mark 3:6 And the Pharisees went ſorth, and straightway took counsel with the Herodians against Him, how they might destroy him.

NOTE, it is ſolly to doubt whether there be devils, while devils incarnate dwell among us; what else but devils sure, could make ceremonious hypocrites, consult with politic royalists to destroy the Son oſ God, ſor saving men’s health and lives by miracle? Query. Whether if this withered hand had been their own, they would have plotted to kill him, that would have cured them by a miracle as a sabbath breaker? And whether their successor; would silence and imprison godly ministers, if they could cure them oſ all their sicknesses, and help them to preferment, and give them money to feed their lusts?

Charge of Sedition No. 3:

Mark 9:39 But Jesus said, Forbid him not: ſor there is no man which shall do a miracle in my name, that can lightly speak evil of me.

NOTE, Men that preach in Christ’s name therefore, are not to be silenced, though faulty; iſ they do more good than harm. Dreadful then is the case of them, that silence Christ’s faithful ministers.

Charge of Sedition No. 4:

Mark 11:31. And they reasoned with themselves, saying, If we shall say, From heaven, he will say, Why then did ye not believe him?

NOTE, lt was well that they considered what might be said against them, which now most Christians do not in their disputes. 2. These persecutors and the Romans had some charity and consideration, in that they were restrained by the ſear of the people, and did not accuse and ﬁne them as for routs, riots, and seditions. 3. They that deny necessary premises are not to be disputed with.

Charge of Sedition No. 5:

Mark 12:37-40 And the common people heard him gladly. 38. And he said unto them in his doctrine, Beware oſ the scribes, which love to go in long clothing and love salutations in the market-places, 39. And the chieſ priests in the synagogues, and the uppermost rooms at ſeasts: 40.Which devour widows houses, and for a pretence make long prayers: these shall receive greater damnation.

37 Let not these proud hypocrite deceive you, who by their long liturgies, and ceremonies, and claim of superiority, do but cloak their worldliness, pride and oppression, and are religious to their greater damnation.

Charge of Sedition No. 6:

Luke 10:2 Therefore said he unto them, The harvest truly is great, but the labourers are few: pray ye therefore the Lord of the harvest, that he would send forth labourers into his harvest.

1, 2. As he had chosen twelve, with respect to the twelve tribes; so he chose seventy, according to the number of the great council, it is like 70 being put ſor 72, as an ancient copy hath it. By which it appeareth he settled a disparity in his ministers.
2 NOTE, Priests now are many, but labourers few: What men are they that hate and silence the faithfullest labourers, suspecting that they are not for their interest?

Charge of Sedition No. 7:

John 11:57 Now both the chieſ priests and the Pharisees had given a commandment, that if any man knew where he were, he should shew it, that they might take him.

57. NOTE, 1 Christ’s ministers use God’s ordinances to save men, and the devil’s clergy use them for snares, mischief and murder. 2. They will not let the people be neuters between God and the devil, but force them to be informing persecutors.

Charge of Sedition No. 8:

Acts 15:2 When therefore Paul and Barnabas had no small difference and disputation with them, they determined that Paul and Barnabas, and certain other of them, should go up to Jerusalem unto the apostles and elders about this question.

NOTE To be dissenters and disputants agains errors and tyrannical impositions upon conscience, is no fault but a great duty.
2. It is but a groundless ﬁction oſ some that tell us that this was an appeal to Jerusalem, because it was the metropolis of Syria and Antioch: As if metropolitan church power had been then settled; When long after, when it was devised indeed, Antioch was above Jerusalem: And it is as vain a ﬁction that this was an appeal to a general council, as iſ the apostles and elders at Jerusalem had been a general council, when none of the bishops of the Gentile churches were there, or called thither. lt is notorious that it was an appeal to the apostles (taking in the elders) as those that had the certainest notice oſ Christ’s mind, having conversed with him, and being entrusted to teach all nations whatever he commanded them, and had the greatest measure of the spirit: and also being Jews themselves, were such as the judaizing Christians had no reason to suspect or reject.

Other than John Calvin, no father of the church has been more helpful to me in my work as a shepherd of souls than this dear brother, Richard Baxter. The first two books I read after I was ordained were Baxter’s Autobiography and his manual for pastoral care, The Reformed Pastor. I’ve recommended the second many times to numberless pastors and elders. If you’re a pastor or elder (or aspire to these offices) buy and read it. Carefully. Prayerfully.

In non-canonical literature, John Calvin and Richard Baxter have been my lifeblood. A word to the wise…