Our little ones in Heaven (3): God is never bushwhacked… 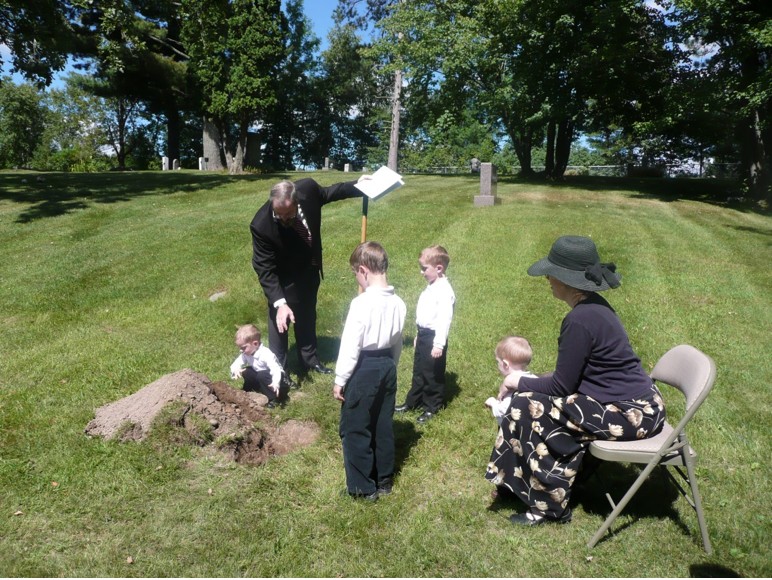 (by David Gray) My wife was in the fifth month of our fifth pregnancy. We had four young boys (we hadn’t had a girl born into the extended Gray family since 1894). Up to this point, the pregnancy had been uneventful. When we went in to the doctor, we would bring the boys with us so they could hear the baby’s heart beat. All six of us were in there with our doctor, a good Roman Catholic. She couldn’t find the heartbeat and she looked to my wife and shook her head.

I ushered the boys out and went to the cafeteria to buy them cookies to eat while I tried to explain the heartbreak to them. 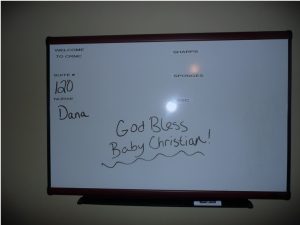 Three days later, my wife delivered our tiny boy. We counted his fingers and toes. Claiming God’s promises, we named him Christian. We gave him the middle name Cargill after the Scottish martyr Donald Cargill.

After the delivery, our doctor asked how my wife how she was doing and she replied “The Lord giveth, the Lord taketh, blessed be the name of the Lord.” I am very thankful for our Christian doctor who understood; also our kind and gracious nurse who cared for my wife.

Under the law, we had to turn his body over to the county for examination and they would not return Christian to us. They would, however, be willing to turn him over to a funeral home.

Again, we were very blessed. We live in a small town with one funeral home which had conducted nearly every extended family funeral for many decades. I talked to them and they said they would be glad to receive him and help us in any way they could. The funeral director explained what we would need to do under the law in order to bury him ourselves; then they turned Christian over to us (not charging us a penny for their services).  The sexton at our local cemetery was also helpful, allowing us to dig his grave and (eventually) place his headstone. 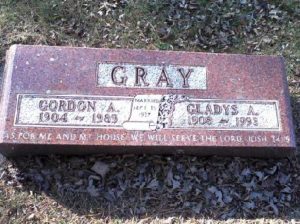 I had retired from military service and I had brought my wife and sons back to our ancestral home so the children could grow up with the family witness our cemetery contained. My grandfather had directed that the headstone for him and his wife contain the words “but as for me and my house, we will serve the LORD” (Joshua 24:15).

These graves were just a short stone’s throw up the hill from where we would now lay our boy to rest. Christian would rest just a few yards from his great-great-grandfather and great-great-grandmother, both of whom were committed Christians.

My six year old son and I went early in the day to dig Christian’s grave.  Later that day our pastor came out and conducted the interment service. This was our order of service. 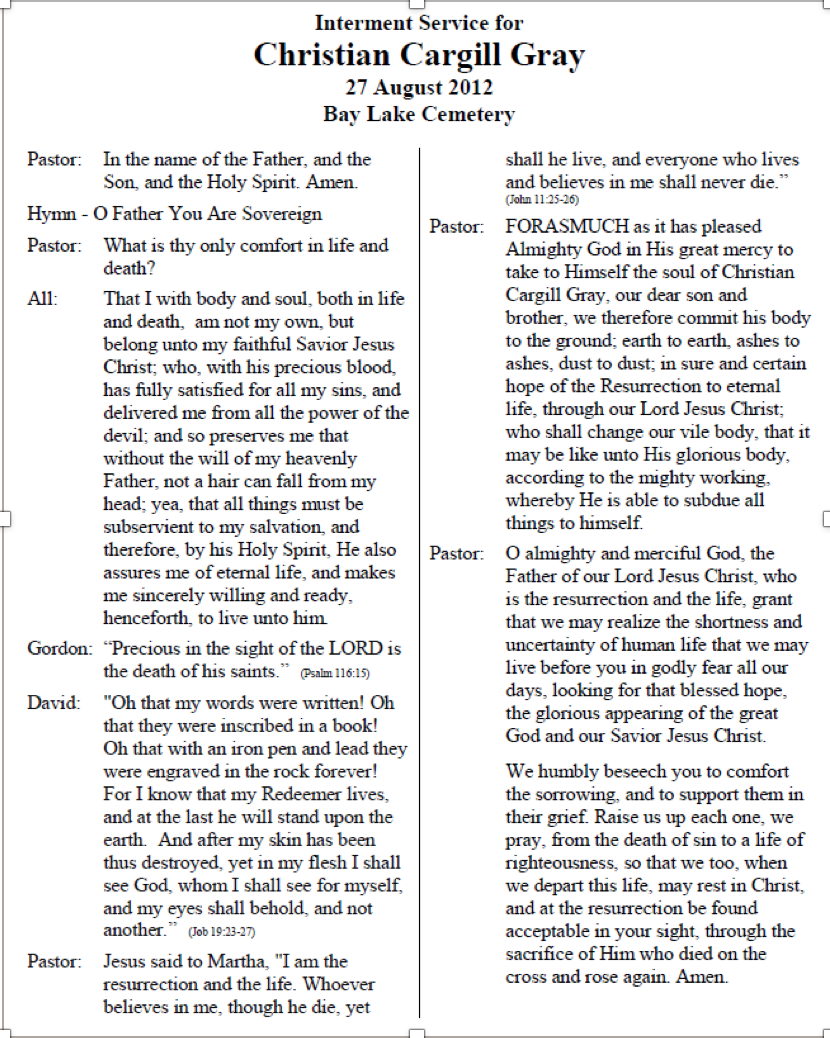 Here is the hymn we sang. It was a great comfort to us in the death of our child. 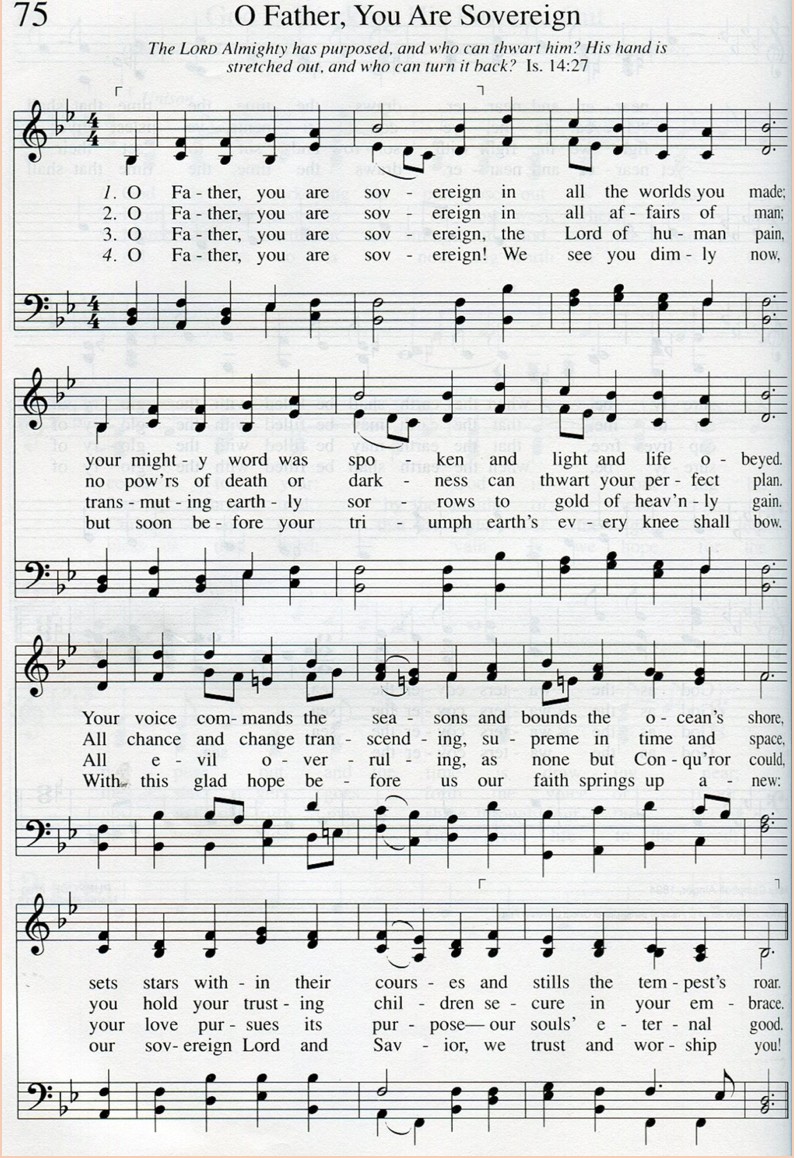 After the service my boys each helped put a bit of the earth on Christian’s grave. We were blessed to have my aunt and uncle there who had some shared experience. In time, God blessed us with another child—the first girl our family had received from Him in nearly 120 years. She would not have been conceived had Christian come to term.

We ordered a headstone for our son and, in due course, installed it. 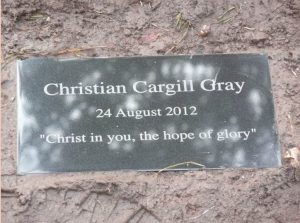 As we wrestled with what had happened, we had to accept two things: first, God loved Christian more than we did; and second, God is sovereign.

When our boy died, God wasn’t distracted by some other problem. God wasn’t bushwhacked by Satan. God’s purposes were fully and lovingly executed for his child—and ours. We couldn’t know the mind of God. We didn’t know why He allowed this manifestation of a fallen world, yet we could know He was in control. He loved our boy so much that He went to the cross and endured it so our boy could be covered with His blood.

Accepting this didn’t dull the pain, but it did give a context for coming to terms with the loss in a way that was true.

Thus says the LORD, “A voice is heard in Ramah, Lamentation and bitter weeping. Rachel is weeping for her children; She refuses to be comforted for her children, Because they are no more.”

Thus says the LORD, “Restrain your voice from weeping And your eyes from tears; For your work will be rewarded,” declares the LORD, ” And they will return from the land of the enemy.

“There is hope for your future,” declares the LORD, “And your children will return to their own territory.” (Jeremiah 31:15-17)

We also looked to our fathers in the faith for our hope for Christian—particularly these words from Martin Luther:

Who can doubt that those Israelite children who died before they could be circumcised on the eighth day were yet saved by the prayers of their parents in view of the promise that God willed to be their God. God has not limited his power to the sacraments, but has made a covenant with us through his word.

But there is a danger that he who is sick may be deprived of the gift of regeneration if he decease without baptism!

By no means. Our children, before they are born, God declares that He adopts for His own when He promises that He will be a God to us, and to our seed after us. In this promise their salvation is included. None will dare to offer such an insult to God as to deny that He is able to give effect to his promise.

Our hopes for our living children had to be centered in Christ, nor was our dead son any different. The basis for all our hopes is God’s promise. We have our hope in Christ that we will see Christian in his resurrected body in the new heavens and the new earth. This hope reminds us of the first question in the Heidelberg Catechism:

Question: What is thy only hope in life and death?

Answer: That I with body and soul, both in life and death, am not my own, but belong unto my faithful Savior Jesus Christ…

In a way, this ties into the last thing I would say to a father or mother who loses an unborn child.

Even if he never got to blow out birthday candles and you never got to change his diaper, your little one was God’s gift to you. God loves your child more than you do. Yes, we grieve deeply for the child He has taken to Himself, yet we also acknowledge that God does what is best.