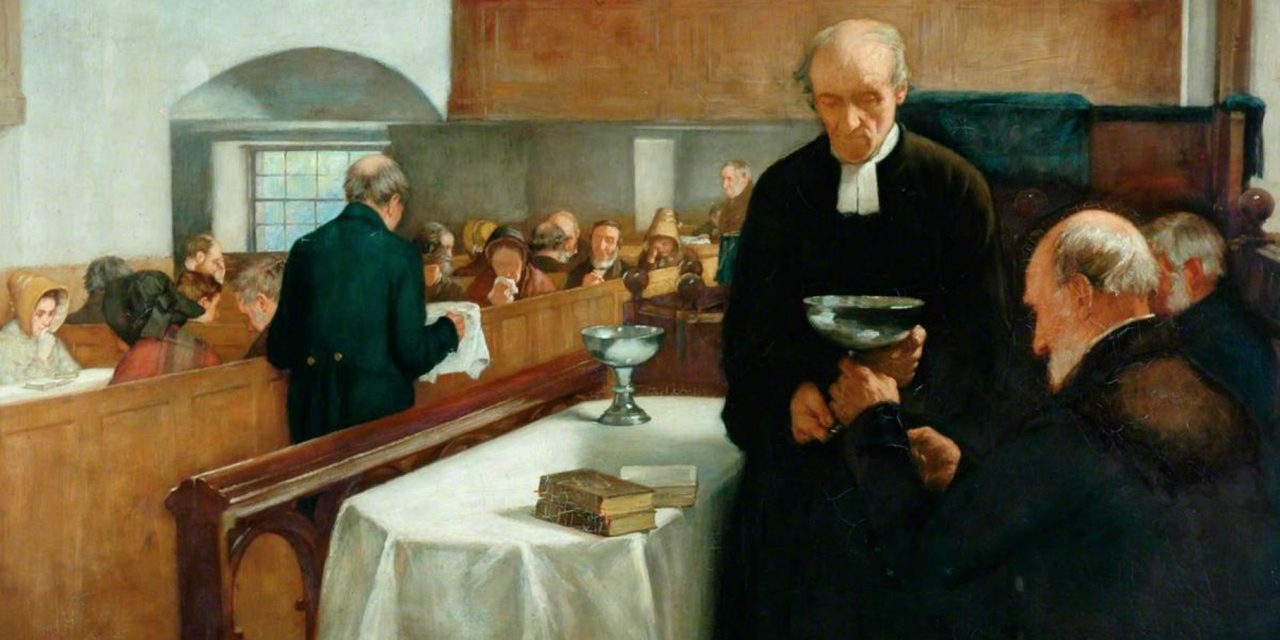 …why not do all of those good things and do what Jesus did in the meal He gave us, in the basic order He gave it? Bread then wine, since that point certainly seems to be emphasized by the Gospels and Paul. Seems like a win/win.

Some thoughts in response.

This is a serious problem for the Romanists because they justify transubstantiation by demanding everyone accept the literal meaning of our Lord’s words “this is my body” and “this is my blood.” Yet He did not say the wine, but the cup is His blood. By their own logic, transubstantiation should change the cup—not the wine—into the blood of Christ.

Now then, Protestant Thimbleists who oppose intinction face a similar problem. Passing a tray filled with thimble-cups containing measured individual portions of wine atomize the common cup into a me-and-Jesus observance that is highly individualistic. Where is the common cup of fellowship Jesus gave His disciples?

Our Lord took “the cup” singular. Not “these cups” plural. He gave “it” (not “them”) to His disciples. Why can’t we do the same? If we must condemn intinction because it fails to emphasize a distinct eating and a distinct drinking, why not reject crumbs and thimblefuls because they fail to emphasize the breaking of the bread and the drinking from one common cup? If we’re going to be rigorists in our observance of the Upper Room details, why not a common loaf and common cup? Wouldn’t this be wonderful in providing a vivid demonstration of all God’s sons and daughters together gathered around the Son, eating His body and drinking His blood?

They all drank from “it.”

If we’re going to argue for the necessity of the restoration of the actual Upper Room practice, we should leave our crumbs and thimbles behind. Would anyone argue that individualized and premasticated portions bear any resemblance at all to the particulars of common loaf and common cup? Where is our concern to communicate and visibly demonstrate one Lord and one Body—both our Lord’s body and the body of believers? The practice of Thimbleists who condemn intinction is personalized portions carefully measured into individualized containers handed out to individuals sitting and ruminating by themselves.

Second, readers will understand that, since it is what was actually done in the Upper Room and the Early Church, my preference is drinking from a common cup. If I had my druthers, all of us communing together at Clearnote would break bread from one loaf and drink from one cup. Failing that, six loaves and cups proffered by pastors and elders across the front of the church with each loaf and cup common to many souls still retains the symbolism in a way that individualized portions do not.

Do I write publicly condemning the Thimbleist practice?

No, not unless some Reformed Thimbleists attack intinction saying it’s unfaithful to the details of the Lord’s commands. Then I will defend intinction against these men by pointing out the particulars of their practice are nowhere close to what Scripture shows was our Lord’s practice. Especially considering these Thimbleists have convinced one missionary of our church that he cannot commune with us any longer when he and his family visit and we’re celebrating the Lord’s Supper. Then the attack necessitates a defense of our practice.

Speaking of Thimbleist practice, it’s also clear the method of eating and drinking in the Upper Room (and Early Church) included dipping bread and eating the moist sop:

It was common practice in the ancient world for one person to extend to another person at the table with him a sop or morsel of bread which was eaten after being dipped—just as Jesus did with Judas:

Jesus then answered, “That is the one for whom I shall dip the morsel and give it to him.” So when He had dipped the morsel, He took and gave it to Judas, the son of Simon Iscariot. (John 13:25, 26)

The sop might be dipped into a meat broth, chutney-like herbal sauce, or mead.  Regardless of the moistening agent, dipping bread into a liquid and eating it was quite normal. When Scripture says “eat this bread” and “drink this cup,” we should remember it was said at tables where the habits of consumption of meat, sauces, bread, and wine was so diverse, organic, and unsanitary in its commonality that we would do well to exercise humility. Let us not be bombastic in arguing for thimbles and crumbs and against dipping bread into wine—particularly when the practice of intinction is admitted to be ancient and continues to be the universal practice of the Eastern church.

Yes, at times intinction has been opposed by various Roman Catholics, but sacramentalists have a habit of making huge stinks over the sacraments’ particularities. After all, they teach that the sacraments save us, so no wonder they tie efficacy to priestly precision. He and his practice matter, eternally.

If one were about to dip the sop into mead or wine, one would still say “eat this bread and drink this cup” with no resultant confusion on the part of those present when one dipped instead of lifting and drinking. Why are we so kludgey in our understanding of Scripture when we know they dipped sops at the table?

Finally, in their post attacking intinction so vehemently, even the Westminster prof and his president declined to out and out condemn intinction. Why not come out and say that intinction invalidates the sacrament?

Because it’s foundational to Reformed sacramentology that we are not rigid in our approach to the elements, mode, or timing of the sacraments. This was Calvin’s commitment and it should be ours because this repudiation of rigidity itself is a confession of faith.

What is the confession?

That, as someone once wrote, “not all Israel is Israel.” There’s an eternity of difference between circumcised foreskins and circumcised hearts.

To sum up, if I were to weigh the relative importance of the absence of any organic unity and fellowship and commonality of elements in the normal Reformed Thimbleist practice today in mainstream Reformed worship with the out-of-order of bread and wine together hitting tongue at same time, but fellowship and commonality of elements of intinction, I’d choose intinction.

Sadly, our knowledge of bacteria has caused us to know the risks of the truly common cup, so this is second-best.

Yet if a man has the pangs of conscience about the togetherness of consumption of elements when intinction is the method of observance, let him squeeze the bread releasing the wine on his tongue before he drops the bread into his mouth. There you have it. Separate bread and wine.

In our age of bacteria, that’s about as close as we can get to our Lord’s common cup.

Yet I do wonder if this man of tender conscience might suspect even that modification of intinction might not invalidate the efficacy of the sacrament? You know, bread coming before—rather than after—the wine.

In Geneva, the congregants came forward and ate at a table, together. And they started communing at eight years of age, after being catechized.