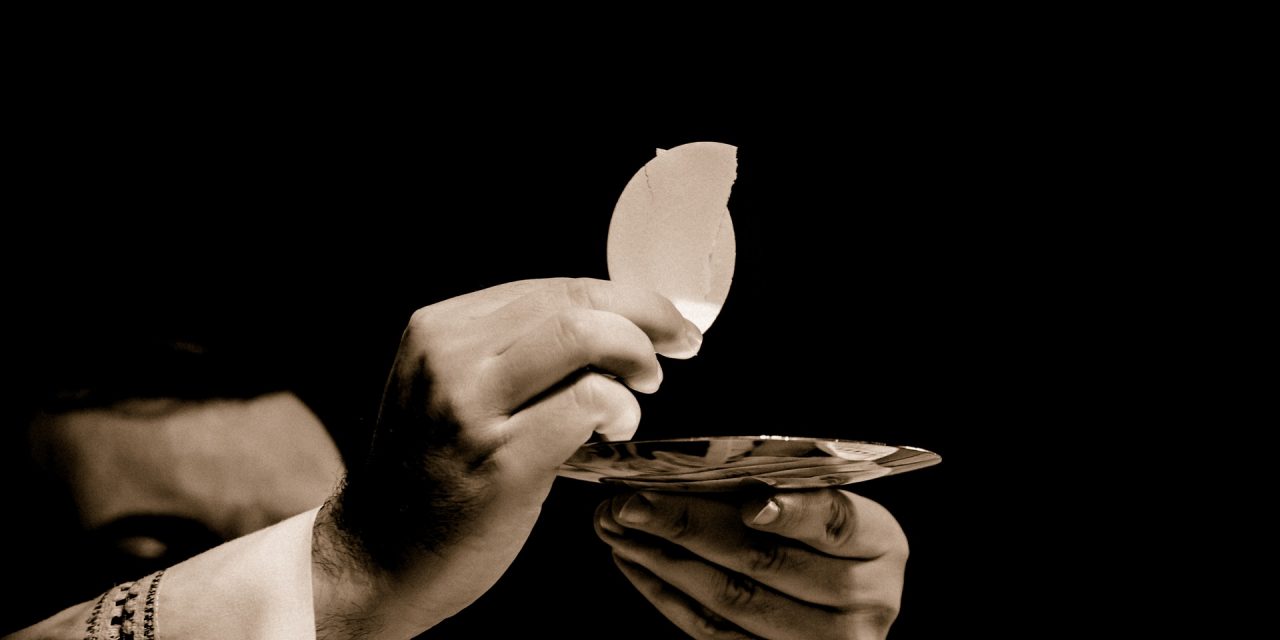 Someone just forwarded a post in which a Reformed pastor and the president of his local seminary got hot and bothered about the practice of intinction. What is intinction?

Intinction is the celebration of our Lord’s Supper by elders holding the bread and cup for the members of the congregation who each tear off a chunk of bread using it to sop up wine. In our congregation, the elder says to each communicant, “(Tim), the body and blood of Christ given for the forgiveness of your sins.”

Why are these men opposing intinction?

Because sopping up the wine is not drinking the  wine. Note their italics:

There is… a drinking from the cup.

They go on to say:

Paul notes a taking, a thanking, a breaking of the bread. Paul says simply “likewise” the same sort of liturgical actions occurred relative to the cup. Paul uses an imperative: “this do.” There is our authority.

There you have it.

So why do churches practice intinction?

I won’t speak for others, but in the case of Clearnote Church, Bloomington, we made this change in order to recover some small degree of the intimacy and fellowship of the Lord’s Supper as it was celebrated in former centuries—particularly the Early Church’s love feasts. No, we don’t believe the best church is the one that does things the same way the Early Church did them, but concerning the celebration of the Lord’s Supper, we wanted to take some small step toward the recovery of the fellowship and unity Scripture places at the heart of Communion’s purposes.

We had grown dissatisfied with “nape-of-the-neck communion” in which the elders walk the aisles passing plates with tiny cups and tinier pieces of bread while those communing do their best to keep their eyes trained on the necks of the souls sitting directly in front of them. This form of administration of the Lord’s Supper allows no possibility of communication between the souls eating and drinking together, and our elders and pastors believe that is a problem. Yes, there is communion with our Lord. Yes; there is vertical communion. But why no horizontal communion?

Not wanting to disrupt the prayers of those around them, each person keeps his eyes front and center.

But in giving this instruction, I do not praise you, because you come together not for the better but for the worse. For, in the first place, when you come together as a church, I hear that divisions exist among you; and in part I believe it. For there must also be factions among you, so that those who are approved may become evident among you. Therefore when you meet together, it is not to eat the Lord’s Supper, for in your eating each one takes his own supper first; and one is hungry and another is drunk. (1 Corinthians 11:17-21)

Divisions corrupted the horizontal communion, and thus the unity of God’s people during the Lord’s Supper in Corinth. Some souls went ahead and ate before their brothers were served. Others were poor and had nothing. Still others were rich and got drunk.

This explains the devolution of our Lord’s Supper practice today in which we face straight ahead with nary a whisper of communion with one another. Certainly it’s all done with an eye to no one going without and no one getting drunk. We are scrupulous to avoid any division that enforced sameness of portion and timing of ingestion can preclude. But is this really the unity of the Body of Christ the Apostle Paul was calling for in the church of Corinth?

If there are good and necessary reasons for our Reformed commitment to proclaim the Word of God prior to the celebration of the Lord’s Supper and those reasons include the possibility of coming under a conviction that we are sinfully divided against our brothers and sisters in Christ present in the sanctuary, why does the normal practice of the Lord’s Supper in our churches prohibit our addressing our sins of division in a timely way? Is our Lord’s command merely hypothetical?

The pastor has preached our Lord’s command that we love one another, causing us to remember and grieve over our harsh words against our brother or sister in Christ. Communion is about to commence, but what are we going to do about it?

We have a few seconds in between the conclusion of the sermon and the time the pastor begins fencing the Table. Is anyone free to get up, squeeze down the row saying “excuse me, excuse me please,” then walk back up the aisle and across the back of the church, up another aisle to where our sister in Christ sits halfway down the row between her husband and their youngest child, then stand at the end of the row and in a stage whisper call out to her “Can we talk? I have something I want to make right with you before we commune together.”

If Reformed people are merely disembodied brains, then by all means we should not worry about communing with the nape of the neck of the man or woman in front of us during the Lord’s Supper. But if, on the other hand, Reformed souls desire to move our worship in the direction of real bodies and real fellowship and real horizontal intimacy that is the fruit of real vertical intimacy, we’d best get ourselves busy at the hard work of the church reformed, always reforming.

We must allow time for spiritual work during our worship. No Biblical command prohibits mid-service repentance and forgiveness in the interest of restoring the unity of the Body of Christ around the Table of our Lord. During the family meal, what harm is there in allowing for the possibility of forgiving and being forgiven? What harm is there in setting up the logistics of the Lord’s Supper such that mingling and conversation with our brothers and sisters in Christ can happen naturally?

This is what we have done.

Some condemn it because sopping isn’t drinking. Would they accept our practice if we asked the souls of our congregation to squeeze the bread above their tongue before dropping it on the tongue? This would provide separate acts of eating and drinking.

Speaking only for myself, I wonder if the threat they feel isn’t actually the sopping, but the horizontal communion?

Jesus then answered, “That is the one for whom I shall dip the morsel and give it to him.” So when He had dipped the morsel, He took and gave it to Judas, the son of Simon Iscariot. (John 13:26)