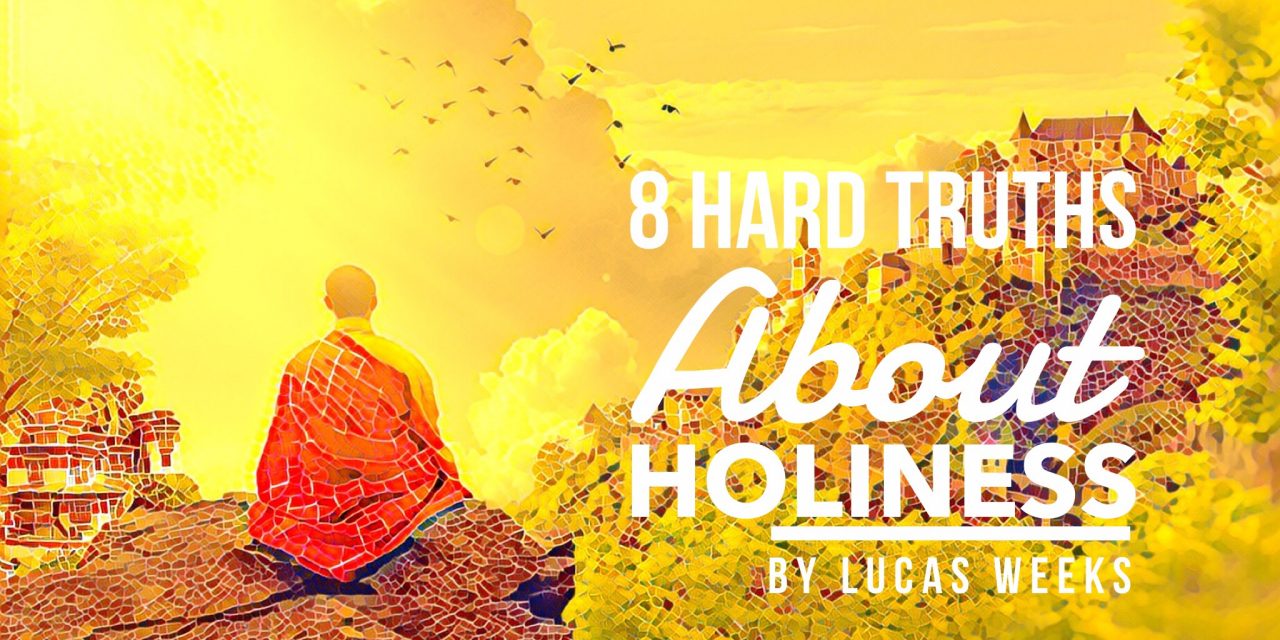 Have you ever met a holy man? What did he look like? Maybe he had a long beard? Perhaps there was a soft glow around his head?

These days, we use the term “holy” to refer to anyone who calls himself holy and keeps a straight face. So when we hear the term “holy”, we think of the Dalai Lama pondering the meaning of life somewhere up in the Himalayas. The Dalai Lama has cachet with our secular and Christianity-hating elites, and so they put up with his holiness schtick.

But Scripture teaches that all fall short of the glory of God. The truth that even the Dalai Lama must learn is that his wickedness makes him an enemy of God. The most important thing he needs—and that I need—is peace with God, and that can never be achieved with “just enough” meditation a mountaintop.

The way to holiness lies through peace with God, and that peace was bought and paid for by the death, burial and resurrection of Jesus Christ. Jesus was the only man who had the right to be called “His Holiness” because he was the only man who perfectly obeyed the law of God. We have access to that holiness only through faith in Him.

With that in mind, here are eight truths about holiness that not everyone likes to remember:

1. We are all commanded to be holy

Scripture repeatedly commands us to be holy. But if you’ve been a Christian for more than 30 seconds, you know that placing your faith in Jesus Christ didn’t happen with a musical crescendo and a beam of light shooting out of your chest.

Holiness isn’t just for the shock troop Christians on the frontline of living for Jesus. Holiness is what we’re all called to pursue.

You don’t have to “crack the holiness code”. There isn’t a secret club or a mysterious incantation you that you need to repeat. Nor is it necessarily always obvious what to do to be holy. You may have to turn off the television and read a book to discover it. A good place to start would be Horatius Bonar’s book God’s Way of Holiness, available here as Peace and Holiness. But fundamentally, God has given us His Word, and He has given us men and women throughout church history who have very helpfully shown us the way in what they’ve written.

The Roman Catholic church tried that many years ago, and, unfortunately, are still trying it. We Protestants do this, too, by teaching with our actions, if not with our words, that holiness is really about achieving a particular socio-economic status.

Indeed, it’s a common conceit of ours that if we just give everyone enough stuff and comfort, then they will behave more decently. But that goes about as well as trying to bribe a terrorist. You’ve got a heart that’s desperately wicked (so says the Bible), and you think you’re going to bribe it and it will behave better? No. It’s going to eat you alive.

If two brothers are able to share a room and not kill each other, its a small miracle. But when you notice that putting those same brothers in separate rooms means that there’s less fighting, don’t think for a minute that it’s because they’ve grown in holiness.

4. Holiness can’t be hired out

Conservative, reformed protestants like to hire out their holiness. We buy books and attend seminars so that we can pay that “big man” to be pious and spiritual and holy. You know who I’m talking about. It’s much easier to pay John Piper or the missionary couple supported by your church to be holy than to try to tackle it yourself.

But obedience doesn’t work like that, and it’s no good to pay a select few to be holy for the rest of us. Each of us sitting in the pews is called by God to be Holy.

5. Holiness is a fruit, not a root

It’s very easy to get holiness and justification mixed up. It’s central to the fight between Protestants and Roman Catholics, after all, and that’s an argument that has gone on for centuries. But the key is that the growth of holiness in the life of every Christian flows out of their acceptance before God, not the other way around. Christ’s life was what satisfied God’s demand for perfection, not yours.

6. Holiness is difficult and costly

We are willing to accept that perfection in sports or acting or music will be difficult and costly, and we applaud those men and women who make the sacrifices in those areas. But personal holiness? We think something’s wrong when God isn’t making us more holy while we sit on the couch watching reruns of Friends. If any amount of suffering comes our way, we think something’s wrong. That’s crazy.

7. Holiness is for everyday life

For one reason or another, we seem to think that holiness requires that you live in a desert somewhere and eat bugs every day. The Bible certainly contains stories of holy men who lived like that, and so I’m sure that has something to do with why we think that way. Still, God calls everyday Christians to be holy. You know, the ones with jobs and families and little league games and houses that need to be fixed and cars and… basically, you and me. You aren’t called to be holy by abandoning your daily life and heading for the hills. You are called to be holy right now, right where you are. In your home and at your work.

8. Holiness is a non-negotiable

Hebrews 12:14 commands us to “Strive for peace with everyone, and for the holiness without which no one will see the Lord.” Holiness is non-negotiable for the Christian. If you’re living in sin, you must confess that sin and turn away from it. There is no such thing as a “carnal Christian.”