Why You Should Be More Condescending 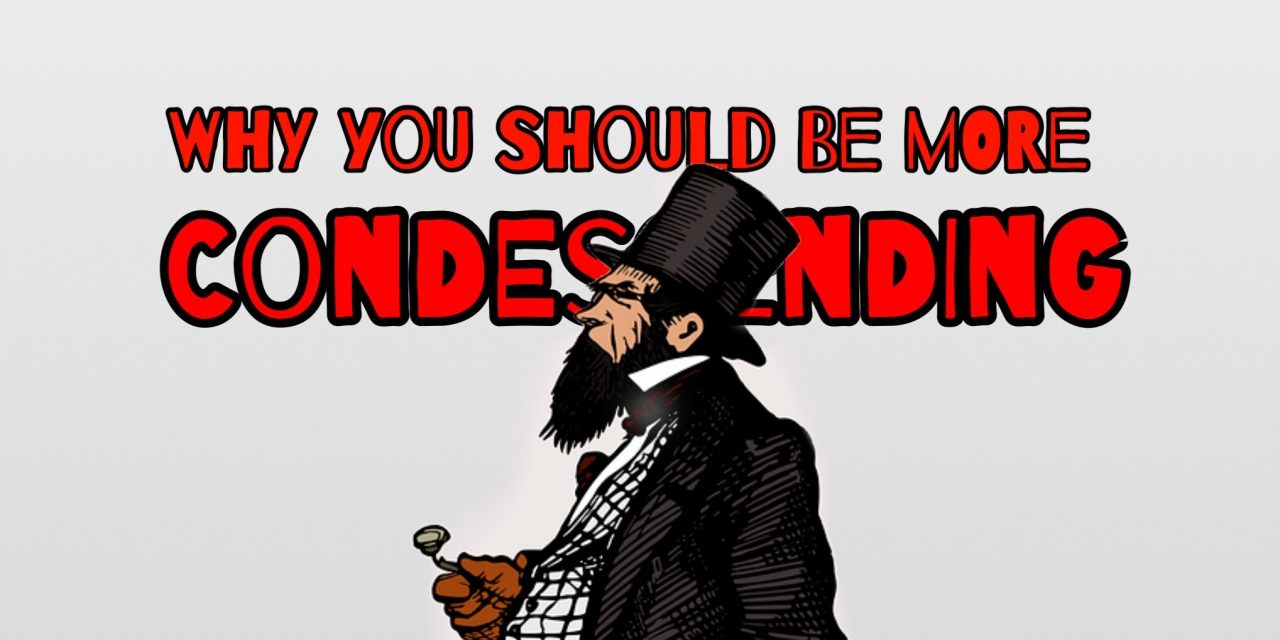 Be more condescending. It will make you a better Christian, improve your relationships, and double your chances of a date on Saturday night. I could write a self-help book and I wouldn’t be lying. That might make me a pioneer in the self-help field.

When we say someone acts condescendingly, we mean they act proudly or disdainfully. But it’s a specific sort of pride. It’s talking down to somebody—somebody who doesn’t deserve it.

Example: the dreaded mansplainer. As all concerned citizens know, a mansplainer is a man who feels he must lower himself to explain something to a woman. He assumes she (being a she) can’t identify the choke-plate on a carburetor (!!!).

There we see two elements of condescension. The perpetrator:

1) lowers himself to another’s level

2) and does it arrogantly.

Another example: adults who talk to even older kids in a syrupy, faux-cheerful “kid” voice. There’s the two elements again—the adult 1) lowers himself (to the level of a child who doesn’t speak perfect English), and 2) does it arrogantly (by assuming the child only speaks perfect Elmo).

Thing is: only the first element, the lowering, was inherent to the word originally.

Since at least the 1600s, “to condescend” has meant “to lower one’s self.” Merriam-Webster’s first definition of condescension is “voluntary descent from one’s rank or dignity in relations with an inferior.” No judgement attached. Just an action a superior makes in relation to an inferior.

I was reading the great Jane Austen recently, and that word, and the concept it entails, comes up a lot. The big example is Mr. Collins in Pride and Prejudice. If you’ve read the novel or seen the movies, you remember that Mr. Colllins is an obsequious toady to his benefactress, the high-class Lady Catherine. And he’s forever blathering about how Lady Catherine is “all affability and condescension.” The Great Lady condescends to address him, advise him, invite him for dinner, etc. Condescension, as Collins understands it, is Lady Catherine treating a man of lower station than herself with kindness.

That’s a thorny example, however, because Mr. Collins is an idiot and Lady Catherine is a proud and presumptuous woman. If there is good condescension, Lady Catherine ain’t it.

But the word is applied to more commendable characters in the Austen-verse. Emma in Emma enjoys herself at a lower-class party and is happy she condescended to attend. And we see the concept of condescension at work in those characters whom Austen admires most, such as Mr. Knightley.

Mr. Knightley (bear with me if you haven’t had the pleasure) is a wealthy landowner and the principle gallant hero of Emma. What makes someone like Knightley a good (and attractive) man is not that he ignores distinctions of rank, dignity, or superiority, but that he does his duty as someone who possesses plenty of all three. As someone with money and intelligence, Mr. Knightley seems to see it as his job to help the poor—and even the foolish.

When snooty Mr. Elton humiliates poor, low-class Harriet Smith by not inviting her to dance (it’s a long story), Mr. Knightley quickly asks her to dance with himself. He earlier advised Emma against trying to elevate Harriet to their class. Spending too much time among the wealthy will only make her discontent. Harriet is sweet and kind of dumb and Mr. Knightley has no delusions about her. But he does pity her and save her from distress.

Were she a woman of fortune [he says] I would leave every harmless absurdity to take its chance, I would not quarrel with you for any liberties of manner. Were she your equal in situation — but, Emma, consider how far this is from being the case. She is poor; she has sunk from the comforts she was born to; and, if she live to old age, must probably sink more. Her situation should secure your compassion.

Mr. Knightley’s goal is not to convince Emma that Miss Bates is their equal. It’s precisely because she’s not that Emma should have forbearance, should be more condescending.

It’s not hard to see how the knightliness of Mr. Knightley fell out of fashion. To suffer a fool, you must acknowledge a fool. To pity the poor, you have to accept that the poor will always be among you. To help the weak, you have to believe in weakness.

And while Jane Austen didn’t have trouble with the “voluntary descent from rank or dignity in relation to an inferior” variety of condescension, we have enormous trouble today, because we don’t believe in rank, dignity, or inferiority in the field of … anything.

And when I say “we,” I don’t just mean your aunt who posts Maya Angelou quotes on Facebook. I mean I don’t like believing that my friend Drew is better at chess than me. Or that my pastor Tim has more moral authority and wisdom than me. Or that executive-director of Warhorn Media Jake is thin and I am fat.

Sure, Drew beats me at chess, compared to Tim I have the moral authority of a cheese grater, and Jake exists in a glorified state of thinner-than-thou. But these are accidents of circumstance. They have nothing to do with innate abilities or gifts. If I wanted, I could be a chess grandmaster, know the Institutes like I know Marvel movies, and lose a hundred pounds. But I don’t want to, so there. (This is known in the theory of argumentation as the Fourth-Grader Defense).

No wonder condescension feels so condescending. When the mansplainer mansplains, he assumes for himself the dignity of knowing how carburetors work because of his rank as a superior male. Not cool, Dudebro. I’ve even got dirty looks holding doors for ladies because (I guess) I’m making a claim about the inferiority of feminine muscles.

And it’s not just sex relations. Every third article in Parenting magazine tells you not to condescend to your kids (give choices, use reasoning or logical consequences—anything but treat a child as inferior in rank or dignity).

And what about the rich and the poor? I doubt Mr. Knightley’s kindness to poor people like Miss Bates would make him popular among today’s social justice warriors. I can imagine think pieces with headlines like “Knightley In Shining Armor? … How Philanthropists like George Knightley Are Perpetuating a System of Inequality.”

Anyway, you see why the idea of condescension got stuffed down the garbage disposal.

But I say we reclaim it as a virtue, because it is one. A simple virtue, maybe. A virtue that many cultures haven’t bothered to call a virtue because it’s just assumed of any rational human. Eating isn’t a virtue, exactly, but it would be in a society of anorexics. And our society has collective anorexia of the mind, an inability to be nourished by simple facts about people and how they are. But that’s all condescension is: seeing people accurately and acting accordingly.

But first you must see people accurately, which means seeing that people (sorry founding fathers) aren’t equal. The Bible presupposes differences in ability and station.

Start with Adam and Eve. Eve was created as Adam’s helpmate. He has one rank and dignity, she has another.

True, in Christ there is neither Jew nor Greek, slave nor free, man nor woman. But the same man who wrote that spends a good part of almost all his epistles telling different persons how to relate to one another. Husbands love wives, wives obey husbands, children obey parents, masters don’t mistreat slaves, and so on. He also makes distinctions of ability. Some people have this or that gift and not the other one, not every man should be an overseer, that kind of thing.

That’s just the Apostle Paul. What about Solomon dividing the wise from the foolish? Or Jesus making statements such as “it is harder for a rich man to enter the kingdom of heaven than a camel to go through the eye of a needle.” 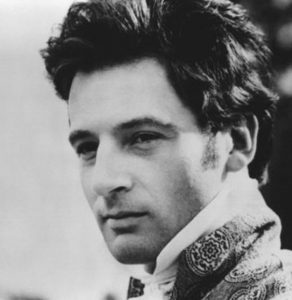 Here’s Mr. Knightley from one of the movie versions of ‘Emma.’ Condescension makes you kinda dreamy, right, ladies?

But God is condescending and we should be too. Which isn’t to say there’s no such thing as bad condescension—snobbishly assuming someone is lower than you when they’re not.

But I’ve found it helpful to think who is smarter or dumber than me, richer or poorer, weaker or stronger, gifted or less gifted. There are people I can love better, for example, if I don’t have to assume they’re as intelligent as me. I can adjust my expectations for the conversation and use appropriate vocabulary, tell them what I want, listen to their stories—whatever it is—in a way that’s more meaningful to both of us.

And if that still sounds snooty, it goes both ways. Many people are smarter, godlier, more gifted than yours truly. It’s nice to be okay with that, to just admit that a monkey is better at mathematics than me, I couldn’t do a pull-up in a zero-gravity chamber, and there are things that depress or worry me that glance off other men. I’m weak and I’d be sorry if none of the strong members of the body of Christ condescended to bear with me, love me, and improve me.

Plus I’ve begun to notice people everywhere who refuse to be condescending and make themselves and everyone miserable. Dads who manage furious bewilderment every time Junior brings back the wrong-sized socket. Teachers befuddled why any of their students need to be taught. Husbands who cannot comprehend why joking about that one thing always makes her cry. Woman who choose necklines with no regard for the weakness of their male peers.

Some of that might seem obvious to you, the common-sense things that the stronger do to live with the weaker in an understanding way. But don’t be too hard on your friends and neighbors. In a world without condescension, nothing can be assumed.

For more thoughts on condescension and the awesomeness of Mr. Knightley, listen to our podcast episodes on Emma.

Tags: Fatherhood, I Feel Bad About Myself, Pastoral care