#simpleliving: the Bad & the Ugly 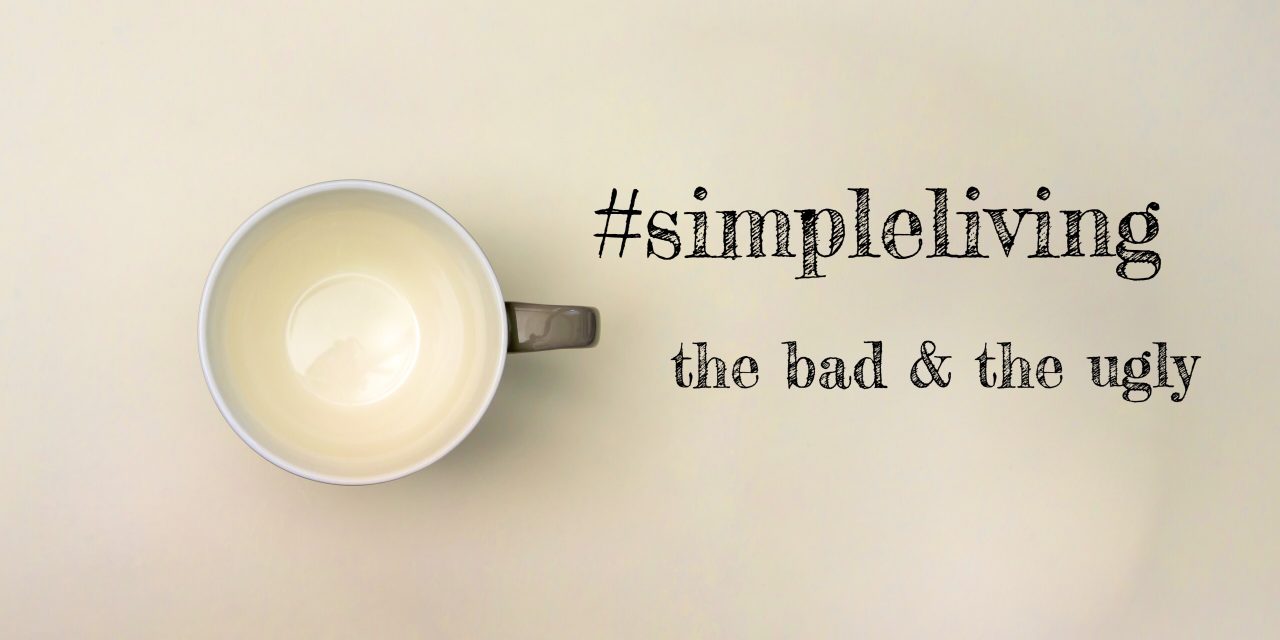 In case you missed it, this is the third post in a series about #simpleliving and the #minimalist movement. Click here for part 1 and part 2.

Last year, a documentary called “Minimalism” featured the #simpleliving movement. Its subtitle reads: “A Documentary About the Important Things.” According to the documentary, the #simplelife claims to clear away excess and clutter, stripping things down to what is most important. But here’s the rub: Christians can never come to a consensus with the world about what those most important things are. It’s all well and good for me to clear away distractions, but in my story, the #simplelife itself became a distraction.

As a convert to the #simpleliving lifestyle, I emptied the closets and purged clothes, notebooks, pictures, and what-not. It was a good process. So I moved on to the next thing—uprooting our insidious dependence on paper towels. Now, some of you uninitiated may be asking yourselves, “What do paper towels have to do with #simpleliving?” Let me explain.

Part of cultivating a #simplelife is choosing to do what is better for the environment and cutting out unnecessary purchases, and since we’d have to be zealots to cut out toilet paper and Q-tips, paper towels become the whipping boy. It’s like a rite of passage.

So I purchased microfiber cloths and dutifully started reaching for them every time I wanted a paper towel. Then one day, I spilled a container of raw chicken all over the floor. Now, let me tell you, if there’s one thing I don’t want to wipe up with a microfiber cloth and then toss in the washing machine, it’s raw chicken juice. Blech. But there were no paper towels in the house, because #simplelife. 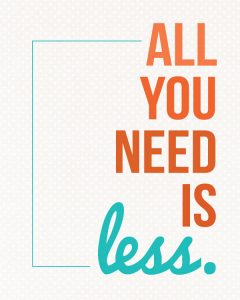 Isn’t it funny how, in the pursuit of a #simplelife I could still tie myself up in knots trying to achieve mastery? No matter how far I took this #simple crusade, there was always a Pinterest picture of an emptier house, an Instagram shot of a simpler, calmer mama, or a blogger who chronicled her zen-like existence weaving her own toilet paper. Who knew mastering the #simplelife would be so complex?

If you take a closer look, the movement to a #simplelife is rife with moral superiority, posturing, and virtue-signaling. It’s the perfect social movement for Christians like me. All we have to do is posture it as a response to American excess and materialism. Who can argue with that, right?

But when we curb our materialism and allow moralism and spiritual pride to flourish in its place, is that a spiritual victory? Of course not. Our hearts are little idol factories. Here are some of the little devils that like to set up shop when materialism is swept out by the #simplelife:

1. Simplicity as an Achievement (aka Pride)

I recently ran across a #simpleliving blogger who bragged about the small space she lived in: “750 square feet with 4 cats, 2 dogs, and 2 humans…how we do it without going crazy.” I had to laugh. In her world, that qualifies her as some sort of space-efficiency expert and simplicity guru. Do I have her beat in my 1200 square feet with 2 adults and 4 kids? What if I added a few dogs? #moralsuperiority

All that to say, one man’s simple is another man’s complicated, and not only do the comparisons never cease, but neither do the opportunities to outdo one another and ourselves. One #simpleminded fashion blogger advocates discarding all but 20 items from your wardrobe. Probably there are some out there advocating 0 items in your wardrobe.

Just like my paper towel fiasco, there’s always some way to level up.

There are books and blog posts that actually claim that the #simplelife is a Christian concept. But any time a social crusade is adopted and spiritualized we should be suspicious.

Several years ago, I ran across Jen Hatmaker’s book 7: An Experimental Mutiny Against Excess. In this book, Hatmaker hosts some hurricane victims in her home. When a guest calls her “rich,” it causes her to evaluate the prosperity of her lifestyle. So what does she do? She begins a series of social experiments in which she strips down to the bare necessities in different areas of her life.

The first experiment involves deciding to live on 7 foods—nay, 7 ingredients—for a month. Hatmaker carefully chooses which seven foods will nourish her body sufficiently, and chronicles her adventures in eating simply for a month’s time. Except when she cheats. Gee, sounds a bit more like a cleanse than a fast, doesn’t it?

Does it really help her identify with the poor to eat 7 healthy foods for a month? How many people wish they had the luxury to go on her diet? I couldn’t read beyond the first chapter because of her gimmick of taking a health trend and a social movement and marrying them to create an “experiment” … which she then presents as a spiritual journey.

3. Simplicity as a Status Symbol

There’s an embarrassing aspect of #minimalism that I’ve realized from observing those who are truly poor in other countries: just as our lifestyle of excess is a privilege of wealth, so, too, is the minimalist lifestyle.

Marie Kondo’s wildly popular book The Life-Changing Magic of Tidying Up famously tells us to ask of every item we own, “Does this spark joy?” and discard it if the answer is no.

But the ability to simply throw something away because it doesn’t strike our fancy is itself a luxury. The true poor of this world can’t afford to get rid of something just because it is damaged or it does not spark joy. They have to stash it away, in case they ever need it again. They don’t have the luxury of telling themselves, “Well, I can always buy a new one” as they fling it in the trash, even if it is only a shirt.

4. Simplicity as a White-Washed Tomb

When our lives look perfectly ordered and clean on the outside, it serves as a good distraction tactic from the sin festering on the inside. I like control. When I can’t have control, I like to at least have a facade of control. If I present an image that is clean and tidy, I’ve got you duped. And maybe I can dupe myself, too.

In other words, the pressure to constantly declutter and simplify can be just as stressful (or more stressful than) as a cluttered environment. Neither produces the intended result, because neither focuses on the real issue: contentment.

5. Simplicity as an Aesthetic 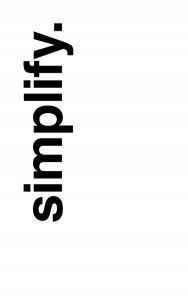 Do some poking around on Instagram and you’ll notice that the #simplelife is more than just the dispensing of excess. It’s a carefully cropped image, a curated home, a particular aesthetic that appeals to us moms who are grasping for anything that feels calm and predictable as we wipe grape jelly fingerprints off the face of our iPhones and wonder where that weird smell is coming from.

“If you are going to have less things, they have to be great things.” -John Maeda

It turns out, the call to the #simplelife may not be so antithetical to materialism after all. It doesn’t matter whether we emphasize quality or quantity, the focus is still on #allthethings. And now, we’ve come full circle. The first little devil is back.

The #simplelife is helpful only as long as we use it as a tool in the work of our sanctification. But it’s easy to get the cart ahead of the horse and hold up the #simplelife as the destination. Let’s imitate the Apostle Paul in finding the secret of contentment in any circumstance—simple or not—because we hold the greatest treasure in our hearts, the pearl of great cost: Jesus Christ.

If we value our citizenship in Heaven over any sense of belonging or accumulation of wealth or friends or experience, then all the excess and clutter will fall away and we will indeed be free to focus on what is most important. 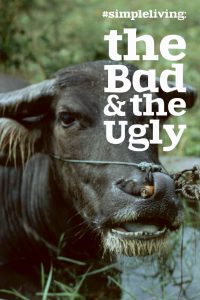