5 Ways to Avoid Conflict This Christmas 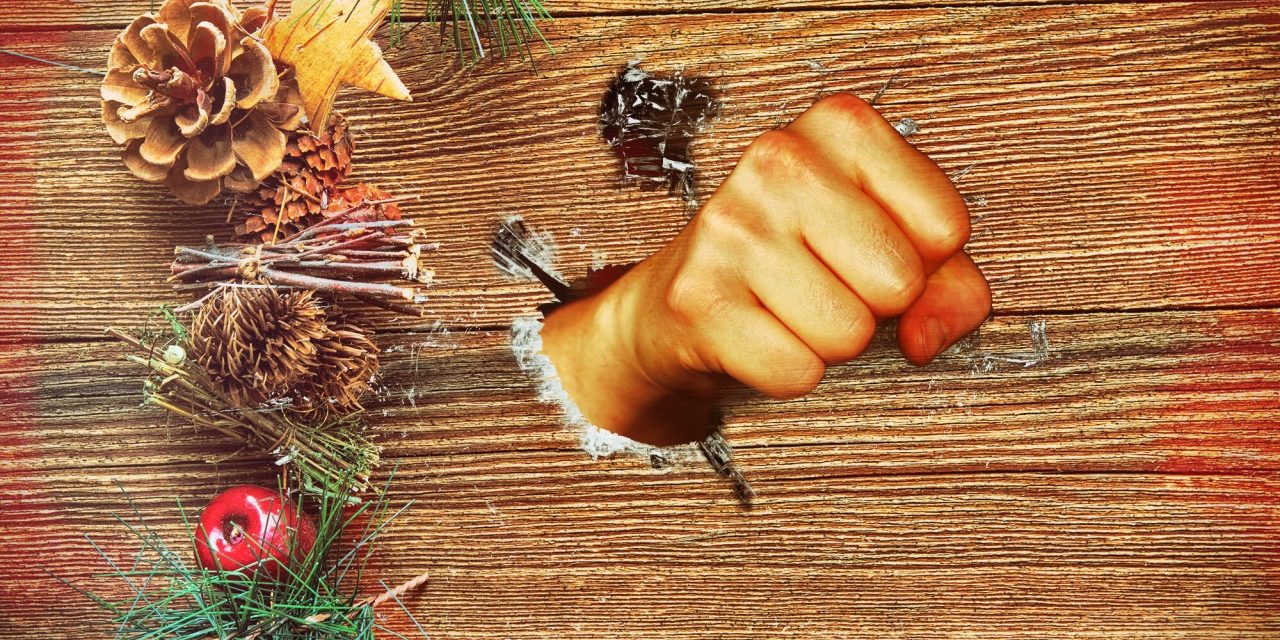 Funny story: My sons and their cousin attend the same school, and last week we attended their Christmas program. It was held in the sanctuary of a local church, and it was packed to the gills. There was not an open seat in the house, and entire families stood in the back of the sanctuary to watch the program. My sister arrived a few minutes late, and squeezed into the back of the sanctuary to watch her son perform. As she was standing there, she felt a shove from behind. A woman was standing behind my sister in the doorway, looking daggers at her.

My sister, taken aback, said, “Move where?” After all, there was no where else to move.

“Stand in front of someone else,” the woman spat back at her.

“Are you kidding me?” said my sister again.

“Do you want to take this outside?” threatened the woman.

Now my sister did not want to commence the holiday season by getting in a fist fight at a children’s Christmas program, so she made a quick exit to the foyer.

Apparently, my sister was in this woman’s space. By blocking her view (no matter that many others were forced to do the same thing), my sister so violated this woman’s sensibilities that she was willing to come to blows. Now of course, the entire scenario is hilarious. Who does that, right? And at Christmas, of all times. This woman was lacking any sense of perspective, much less holiday cheer.

But my sister isn’t the only one standing in someone’s bubble at Christmastime. With family visits and high expectations, it’s a time of year when we all tend to lose our sense of perspective. There’s something about the holidays that puts people on edge. Tensions that lie dormant 11 months of the year suddenly pop to the surface.

Maybe you and your family are all staying in the same house, or spending a concentrated week together. Maybe it’s the only time you see these people out of the entire year, and you’re determined to make a good impression. Maybe there are high expectations for what a Christmas holiday should entail. Maybe there’s an overbearing or manipulative family member, and you’ve determined ahead of time that this year you won’t take any nonsense. Maybe you’ve grown and changed as a person, but you feel your family will never recognize you as anything more than the 17-year-old version of yourself. Or worst of all, maybe the moment you arrive back home you notice with horror that you’ve reverted back to the 17-year-old version of yourself.

So how do we prepare our hearts to celebrate Christ’s birth without an emotional firework show? How do we spend time with family without growing peevish or taking part in pointless conflict? Here are five ways:

1. Don’t take offense. Choose to assume the best intentions, even if you strongly suspect otherwise. Maybe that family member really is being a pig-headed, self-absorbed jerk. Maybe they really are trying to pick a fight. But 1 Corinthians 13:5 has something to say about that: Love “is not provoked, does not take into account a wrong suffered.”

2. Don’t make your emotional outlook dependent on someone else’s mood. Anchor your emotions in Christ Himself, and give thanks for the Incarnation. Is your uncle a notorious scrooge? Does your little sister check out on her cell phone? That’s ok. You can’t make them have fun. But you can celebrate in spite of it.

3. Watch your own words and actions. Just as it becomes easy to take offense, remember that others will easily take offense at you. Light-hearted criticizing, complaining, or teasing can quickly turn sour, so be careful. When you fear you’ve misspoken, apologize immediately.

4. Expect speed bumps. Conflict will come. Oftentimes it is necessary. But keep it short and sweet. If you find yourself shouting, or asking someone if they want to take it outside, take a breather to gain some perspective. Then go back and apologize. Forgive, even if the other person didn’t extend an apology. Move on.

5. Be a peacemaker. When you see someone else’s hackles rising, try to defuse the situation or turn the conversation in another direction. If your aunt offers unsolicited dieting advice to your cousin, do your best to apply the balm of kind words.

Let me end by saying that not all conflict is pointless. Much of it is necessary and fruitful. As Christians, we must not avoid conflict at all costs. There are many times when we bear the responsibility of confronting family members about sin or entreating them to embrace the Gospel. But I think if we look back over a lifetime of family reunions and holidays, we will find that in many of our arguments with family members, it was our own ego and not the Gospel that was at stake. I aim to keep this at the forefront of my mind this holiday season and I hope you will too!

Tags: Christmas, I Feel Bad About Myself, Motherhood, Suffering