Death Be Not Proud

I was nine years old, and mom and her friend took my sister and me to see the new Little Women in theaters. We were ecstatic to get to see a movie on the big screen, just us girls, and I enjoyed it immensely. Until, that is, the scene when Beth dies. The image was molded into my brain like a sculptor’s fine work. That, is when I came to fear death.

Many nights following, over the next few months, I was struck with fear as I laid in my bed at night. The longer I laid there thinking, the more afraid I became. Questions whirling—“What if I die in my sleep?” and “Will I wake up in the morning?” I stared wide-eyed into the dark, afraid to let my eyes shut, until finally I would slip out of bed and tiptoe down the hall to find Dad.

Seeing my anxious face, he did what a loving father does—he picked me up and set me in his lap and listened to my fears. Then he reminded me of the man who conquered death to give me life. I found comfort as we talked about Jesus. And he would send me back to bed, reminding me to pray when I become afraid.

In many ways this became something of a theme in our relationship. I would bring my weaknesses and fears to Dad, and he, with words of compassion and love, would point me to Jesus. Over time, the nightly fears subsided, and as I grew in faith I came to appreciate the prospect of my eternal home.

Eleven years later, I sat in a train traveling from Galway, Ireland to Belfast. A young, dark-haired Polish man sat next to me. Despite my efforts to communicate disinterest by keeping in my book, he was unhindered. He continued talking anyway, asking questions, and telling me about his most impressive life. He soon began invading the boundaries of space, and my discomfort heightened. My protest increased when he took my hand. His excuse? To read my palm.

It didn’t matter. He tightened his grip and with one finger began stroking the lines in my hand. After a couple worthless “prophesies” he stated, “you’re afraid of death.” Adamantly I declared, “I am not afraid of death!” and made a final pull of my hand from his grasp.

He looked at me with surprise, “Everyone’s afraid of death.” Trying desperately to remain calm, but flustered as ever on the inside, I explained that I was a Christian and I knew when I died I would go to heaven, and this of course caused me not to fear death.

To a degree however, the man on the train was right—I did fear death. He didn’t know this because he was a prophet. Believe me, he was not.

However confident I may have sounded, the truth was that I was grateful God had not brought death into my life. Different forms of suffering had come, but death had not been one. Despite my head knowledge of Christ’s victory over death, my true thought was, “If someone I love were to die, I couldn’t handle it.”

Nearly nine years after I sat on that train claiming I did not fear death, I sat in a staff meeting at work and looked down at my phone to read a text from Dad.

I fought against the reality that I could lose Dad. Always putting my hope in the next treatment or surgery. Along with the fear of his loss was the seeming untimeliness if it were to occur. The heartbeat of dad’s life was to share Christ with the world. He did this as a pastor at home and through missions abroad. His work was, it seemed, unfinished. In my fear of the possibility of his death my motto became, “There is no way you can prepare yourself for that.”

One afternoon, as I spoke with dad on the phone, in his usual style he wanted to know how I was doing with his illness. And in my usual style I confessed my fears. Even though he was the one sick and dying, he comforted me. He claimed the promise that “to live is Christ and to die is gain.” He told me he was at peace and said, “I’m in God’s hands. What better place is there to be?”

In all the scenarios I had played in my head of how I would respond if dad were to die, a peaceful and calm response was never one. Soon, that time arrived. But I didn’t go running away from the news in a fit of panic. No—I stood peacefully by his bed with Mom and my sister, singing Psalms. “Hope now in God, I’ll praise Him still. My help, my God is He.” (Psalm 42).

The winter winds saw this year begin with my father’s funeral. I have wondered how God might be at work in his death. Then I think of the lives of those whom he labored to give this same heartbeat for Christ, and how his death must kindle an even greater fire in their hearts for the Lord. And how his peace in facing death has spurred greater faith in me.

His passing was only the beginning. The spring brought two more deaths. My grandfather, and then two weeks later, my grandmother.

Somewhere among the deaths of this year I realized what a faithless fool I had been. God has drenched me in His promises over the years as I’ve come to know suffering. But in my fear I forgot that we can indeed prepare ourselves even for death.

I stand on the other side of meeting death now, and while the grief is real, God has strengthened my faith and changed my heart. As time has passed, it no longer feels as though Dad is simply on one of his overseas trips. No. He’s really gone. But while I grieve death for the earthly finality of his absence, I find hope in the promise of our heavenly union, and trust God for His kingdom purpose in the death of the faithful.

I always went to Dad with my fears and sadness. Now Dad is with my heavenly Father, and I am drawn more closely to His throne. I cannot come to God with my grief and sadness in loss without my heart being softened to trust Him. God cares even more than my earthly father could—and oh, how he cared!

I found a strange and precious gift this year. As I stood in the graveyard, there was something serenely beautiful in the sound of Christians singing to God in the presence of death. In gathering together as believers, we joined with the heavenly saints—daughter joining father—to Praise our God.

“But you have come to Mount Zion and to the city of the living God, the heavenly Jerusalem, and to myriads of angels, to the general assembly and church of the firstborn who are enrolled in heaven, and to God, the Judge of all, and to the spirits of the righteous made perfect, and to Jesus, the mediator of a new covenant, and to the sprinkled blood, which speaks better than the blood of Abel.” (Hebrews 12:22-24) 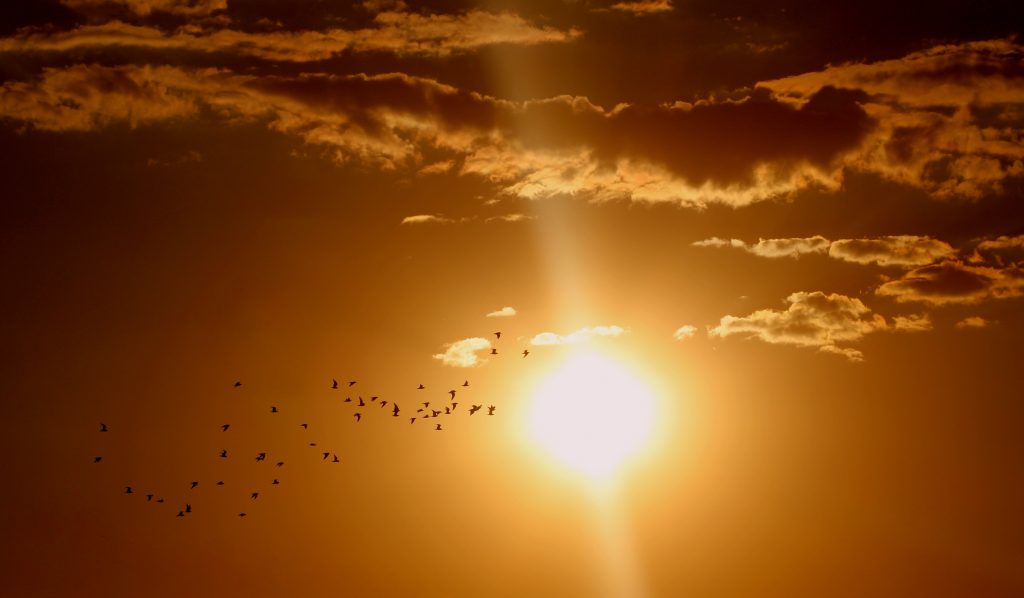 Tags: Death, Fatherhood, I Feel Bad About Myself, Suffering