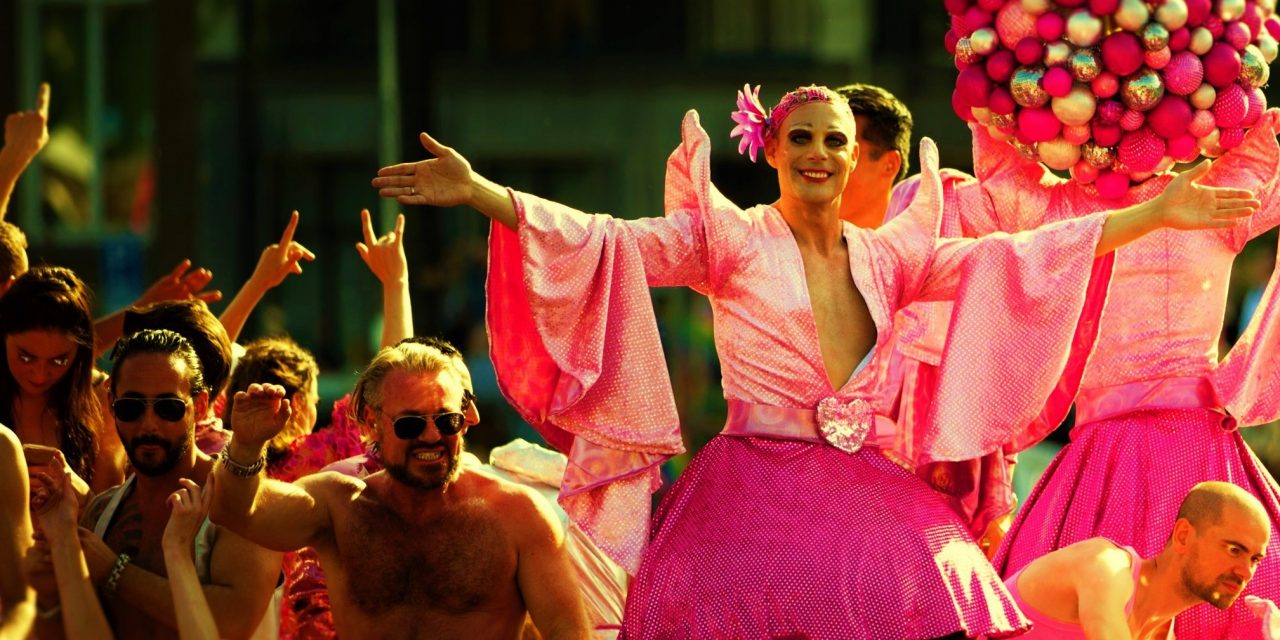 Next up in my reviews of conservative evangelical books on homosexuality: We Cannot Be Silent by R. Albert Mohler Jr. (Thomas Nelson, 2015). We Cannot Be Silent is thorough (251 pages) but engaging. Mohler is the president of Southern Baptist Theological Seminary in Lousiville and maintains national prominence largely through his weekday news podcast, The Briefing (perhaps the inspiration for the cover art). 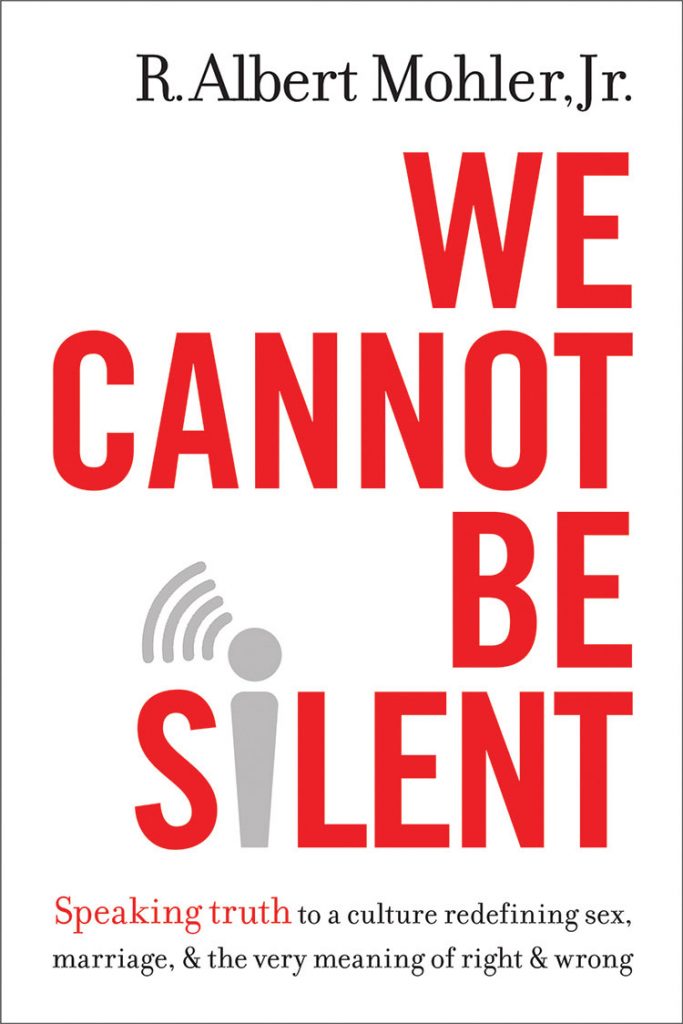 Kevin DeYoung’s book dealt narrowly with the Bible passages that speak directly to homosexuality. Brad Hambrick’s book focused on the importance of building personal relationships with homosexual sinners. In We Cannot Be Silent, Mohler provides a big-picture historical and cultural analysis of the issue of same-sex marriage. He opens up cultural and ethical shifts which led to the legalization of same-sex marriage. The book is his defense of the biblical definition of marriage, and it is a call to Christians to speak the truth regarding marriage to the culture around us.

Most writers hem and haw when they deal with homosexuality. Perhaps the greatest strength of Mohler’s writing is that he speaks directly. His tone, and the title of the book itself show Mohler’s prophetic intent. By “prophetic” I don’t mean he tries to peer into the future. Rather, Mohler intentionally speaks with authority to his readers and calls them to action. That’s what prophets do. He opens chapter 1 by stating that this book is an attempt to “push as hard as the age that pushes against you” (1, quoting Flannery O’Connor).

Mohler believes the church to be the pillar and foundation of the truth, and he upholds the responsibility of the church to speak to the culture:

Explicit Christian truth-telling is the church’s reason for being.…The God of the Bible has sent his church into the world to tell the truth about himself—about his laws and commands, about his grace and love, and most important, about the gospel of Jesus Christ. (7)

This general call to action then bears out specifically in the responsibility of God’s people to uphold Scripture’s teaching about marriage:

Christians must acknowledge that marriage is a pre-political institution. Government does not create marriage—it recognizes it. Likewise, the government does not establish marriage—it respects it. Failing to understand this, many people have fallen into the trap of simply assuming that marriage is whatever any government or system of laws says it is. While the law may redefine marriage in a legal sense, Christians must continue to affirm that marriage, in the eyes of God, remains the union of a man and a woman. (68)

Elsewhere he speaks favorably of the “restraining power of biblical morality” (17) in a nation, a point I’m sure many Christians would dismiss as legalistic or even theocratic. To suggest that one of the church’s jobs is to restrain ungodliness through faithful preaching of God’s Law makes most evangelicals squirm, but Mohler maintains,

Biblical Christianity is the final wall of resistance to the homosexual agenda. In the end, that resistance comes down to the Bible itself. (136)

Mohler effectively connects same-sex marriage to the broader historical context of changes in our Western way of thinking since the Enlightenment. In particular, he identifies four things which helped pave the way for the legalization of same-sex marriage:

Here’s an excellent excerpt on the havoc wreaked by no-fault divorce:

Ultimately, no-fault divorce became…a way of making every single marriage provisional. Marriage was thus shifted from being a covenant into being a mere contract and, as many of the proponents of easy divorce made clear, a contract “just like any other” that should be considered in force only insofar and for so long as both parties feel equally committed to the contract. But as an analysis of marriage throughout history makes clear, marriage has never worked solely as a contract. It only endures and serves its purpose within human society if it is understood as a covenant that requires the commitment not only of the man and the woman who enter it but of the entire civilization to respect and protect it from invasion, from subversion, and from being undermined by forces either from within or without. (28–29)

Later on, “The more we alienate the act of having children from the natural family and the institution of marriage, the more the picture breaks” (117). And again:

The separation of the definition of marriage from the conjugal and comprehensive union of a man and a woman removes any objective argument against the recognition of other forms of adult, consensual, nonreproductive relationships. (119)

In all of this, he effectively helps the reader to see that the legalization of same-sex marriage has been a long time coming.

Mohler deals straightforwardly with the issue of transgenderism. And I was encouraged that he did so by putting great stock in the witness of God’s design in biology. He maintains the duty of the Christian to speak the truth:

Scripture clearly refutes any theory that promotes gender as only a social construction or that human beings are free to define themselves in a way different than the way God defined them in that act of creation. (131)

I see one glaring weakness with Mohler’s cultural analysis. Though willing to tackle controversial issues like the destructive separation of marriage, sex, and children, he remains conspicuously silent on feminism and its contribution to the legalization of same-sex marriage and the transgender revolution. What seems to be lacking is an acknowledgment that the prominence of birth control, no-fault divorce, and transgenderism all emerge from a sexual ethic which began to broadly corrupt American thought no later than the 1840s.

Feminist rebellion against God has broken down our understanding of the distinctions between male and female and their relationship to each other. This breakdown preceded the destruction of marriage we see today. Underneath same-sex marriage is the assumption that women are free to act like men, and men to act like women. The battle is not about marriage—it’s about sexuality. It’s about manhood and womanhood, realities which transcend marriage.

Liberal Protestant denominations have moved away from biblical teachings on human sexuality to the acceptance of same-sex relationships, the affirmation of openly homosexual clergy, and, more recently, the authorization of clergy to perform same-sex marriage. (53–54)

Sex, gender, marriage, and family all come together in the first chapters of Scripture in order to make clear that every aspect of our sexual lives is to submit to the creative purpose of God and be channeled into the exclusive arena of human sexual behavior—marriage—defined clearly and exclusively as the lifelong, monogamous union of a man and a woman. (132)

When Mohler calls marriage the “exclusive arena of human sexual behavior,” he forfeits the possibility of making applications of manhood and womanhood to anything besides marriage. Does Scripture’s teaching on sexuality only apply to me in the context of my marriage? Certainly not! As just one biblical example, take Paul’s specific instructions to Timothy regarding how he is to relate to members of his church:

Do not sharply rebuke an older man, but rather appeal to him as a father, to the younger men as brothers, the older women as mothers, and the younger women as sisters, in all purity. (1 Timothy 5:1–2)

It is clear that Timothy was to take into account the sex of those in his flock as he cared for them. He was to care for men as men, and women as women, even if he wasn’t married to them. But when Mohler limits sexuality to the context of marriage, he fails to get at the heart of the issue. Mohler’s silence on feminism’s contribution to the corruption of a biblical understanding of marriage is a significant shortcoming in an otherwise strong book.

Yes, I would recommend this book. Mohler puts forward some keen and incisive observations about the sneakiness, deception, and hypocrisy of the homosexualist agenda.  He helps the reader begin to think rightly about the arguments that are put forward by the world. In chapter 10, he offers some very practical help in dealing with hard questions related to the issue of same-sex marriage. We Cannot Be Silent is somewhat lengthy and therefore requires more of a commitment, but it is still very accessible. It draws us out of a narrow historical mindset into viewing the issue of same-sex marriage as something much larger, and helps us to realize the need to stand strong now for the sake of our children and the well-being of our nation.