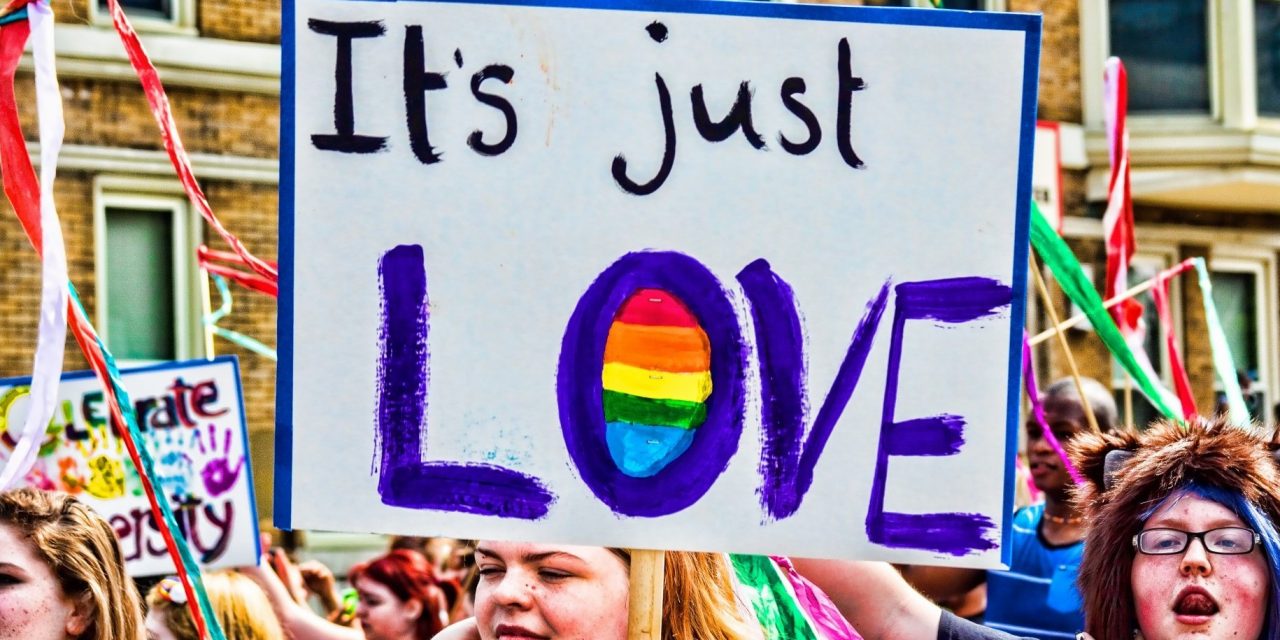 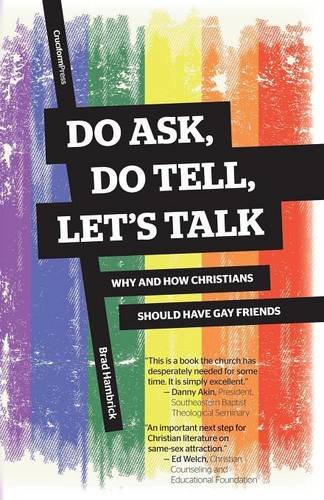 A couple weeks ago I reviewed Kevin DeYoung’s book What Does the Bible Really Teach about Homosexuality? Next up on my reviews of recent conservative evangelical books on homosexuality is Do Ask, Do Tell, Let’s Talk: Why and How Christians Should Have Gay Friends by Brad Hambrick, published by Cruciform Press (2016; 125 pages). I’ve read a couple other books published by Cruciform Press which I’ve found to be faithful: Licensed to Kill: A Field Manual for Mortifying Sin by Brian Hedges and Sexual Detox: A Guide for Guys Who Are Sick of Porn by Tim Challies. Cruciform specializes in short, simple, practical books on issues like sexual sin and finding our identity in Christ. The books have a refreshing lack of flashiness, and I’ve recommended them to my Clearnote Campus Fellowship students. Unfortunately, Do Ask, Do Tell, Let’s Talk doesn’t reflect the typical quality I’ve seen in Cruciform’s books.

Brad Hambrick wrote Do Ask, Do Tell, Let’s Talk because of what he calls an “epidemic of silence” in the church regarding the care of those with homosexual temptations. The book is short and has a very simple purpose: to equip Christians with the tools to build healthier relationships with individuals who are tempted by or in bondage to homosexual sin. The book begins with a definition of terms which Hambrick advocates we use to talk about same-sex sin and temptation (keep reading), and then moves into practical helps for how to build and manage relationships and conversations with those who fall somewhere on this spectrum of homosexual temptation/sin.

Hambrick’s purpose is clear from the beginning of the book: “This is not a book about the Christian church reaching the gay community. Instead, it is a book about individual Christians learning to form better friendships…” (14). I appreciate Hambrick’s focus on the need for sexual sinners to be approached and dealt with as individuals, and not just as a monolithic group or cultural movement. To me this emphasis reflects the nature of a good portion of Jesus’ ministry in the gospels, as well as the apostles’ ministry as described by Paul in Acts 20: “night and day for a period of three years I did not cease to admonish each one with tears” (v. 31, my emphasis). It is a real temptation for Christians to think abstractly about issues like homosexuality, but never process what it might look like to actually minister to those with that particular sin. Public teaching and preaching are vital, and they must be accompanied by ground-level pastoral care.

Do Ask, Do Tell has a decent amount of generally helpful relational advice—how to manage conversations about sin, how to avoid unnecessarily causing offense, how to be patient in the progress of a relationship, etc. In other words, there is some genuinely good advice for relationships in here, but I would suggest there are better places you could learn such lessons.

Spoiler alert: I’m not going to recommend this book. Here are 3 significant reasons why:

In one fell swoop, Hambrick manages to undercut one of the foundational principles of hermeneutics (interpret the unclear in light of the clear), and then to categorically dismiss the relevance of several New Testament passages, without any explanation, and which just happen to be passages that are particularly offensive to our culture. I can’t recommend that anyone trust a Christian author who handles Scripture so flippantly.

2. Throwing the Church under the Bus

Many Christians writing on homosexuality fall all over themselves pointing out how the church has unspeakably mistreated homosexuals. Christians ought to confess their failures. In fact, it’s essential to Christian witness to do so. Sometimes this criticism is good and necessary. But often it sounds an awful lot like throwing Christ’s Church under the bus in order to get in the world’s good graces. In one place, Hambrick writes:

The church has yet to articulate a wise and biblical way to move toward those in our churches and communities who struggle with same-sex attraction. (8)

Really? The church has never managed to successfully minister to homosexuals? Please, do enlighten us. Seriously, even if that is the case today, it’s pretty audacious to say that it’s always been a failure of the church. Though clothed in an air of humility, the absoluteness of this statement ends up casting an arrogant judgment on 2,000 years of faithful followers of Christ. 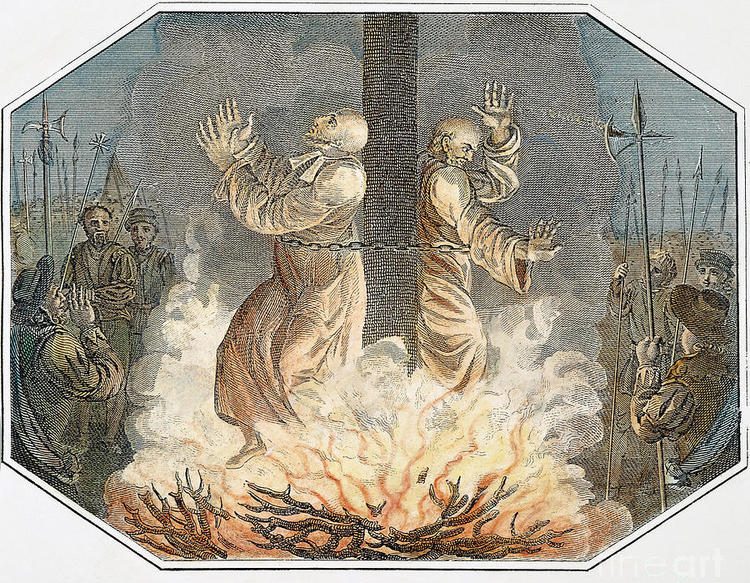 I can just picture English Christians in 1555 looking down their noses at Ridley and Latimer, saying, “I do not consider transubstantiation my stake to burn at.”

Later, Hambrick sets himself apart by saying, “I do not consider homosexuality my hill to die on” (15). I actually would have been more appreciative if he had just said, “Any Christian who thinks homosexuality is a hill to die on is a fool.” But instead he underhandedly disparages Christians who are faithful in this area and willing to suffer for the truth in the face of our culture’s hatred. I can just picture English Christians in 1555 looking down their noses at Ridley and Latimer, saying, “I do not consider transubstantiation my stake to burn at.”

All the books I’ve read on this topic (4 so far) devote a significant section to defining terms. Hambrick’s section on definitions is so fraught with peril, I didn’t know what to do with it. Here are some highlights:

Same-Sex Attraction (SSA) is simply the experience of realizing that you find members of the same gender attractive to the point that you are aroused and romantically captivated. (18)

There’s an overwhelming trend in the church to define homosexual temptation as an entirely passive experience. i.e., not something for which the person “experiencing” it can be responsible. Hambrick goes on to explain how being “aroused” and “romantically captivated” aren’t really sin, because they’re not a “choice.” He explains that it’s important to make sure someone experiencing same-sex attraction knows that they’re suffering, not sinning, so that they can “recognize that Romans 8:1 (‘There is therefore now no condemnation for those who are in Christ Jesus’) can be true for him or her” (19). But this verse is talking about the Christian’s freedom from the condemnation of sin. And the Christian’s ongoing struggle with sin is not solved by explaining sin away as “not sin.” Every Christian must fight the sin that still lives inside them, regardless of their particular temptation, and every Christian needs the assurance of Romans 8:1 that there is still forgiveness in Christ.

While defining “gay identity (GI)” (“when an individual who experiences SSA travels down a path that leads him or her to an ‘I am’ statement”), Hambrick indicates that SSA is about “what I feel,” but since he just informed us that SSA is not sinful, it leaves the reader wondering if anything I feel can be considered sinful? Or does it only become sin once I say or do something on the outside? It’s difficult to tell what Hambrick thinks, but Jesus says sin is lodged in the heart, in our very desires (Mark 7:20–23).

In the section on “homosexual behavior (HB),” Hambrick writes:

Here Hambrick demonstrates distinctions rooted in inherited cultural assumptions, rather than in Scripture, or even in reason. Note the insistence that a homosexual orientation is really no worse than a heterosexual orientation, but that, for some reason, it’s not nearly as bad as a pedophilic orientation. How does Hambrick come to this conclusion? Certainly not by examining Scripture. Incest, bestiality, and homosexuality are each given the designation “abomination” in Scripture and are considered such because they are extreme perversions and represent a more distinct departure from the will of God in sexuality. Think about it: a fornicating heterosexual couple engaged in “extra-marital sex” can repent and begin to honor God with their sexual relationship through marriage. Not so for the homosexual couple. Erasing this distinction is not faithful to the Bible, and it’s not kind to homosexual sinners to paper over their need for forgiveness and God’s willingness to give it.

In the end, Hambrick leaves the reader with no clear idea of what is and what isn’t sin.

Unfortunately, I would not recommend this book. I say “unfortunately” because, so far, it’s the first book I’ve come across with this kind of relational emphasis, and such books need to be written. But the pitfalls of this book are too deep for me to commend it.