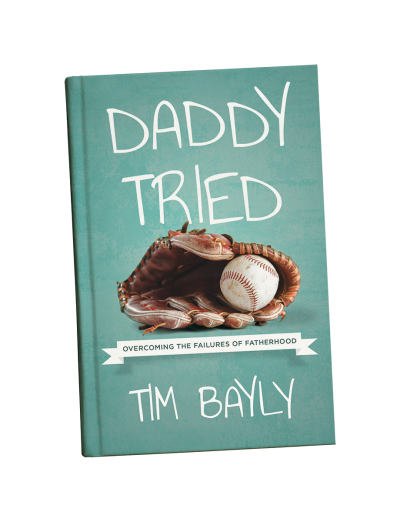 Failed Fathers? Who isn’t in that club?

Daddy Tried is for every man who has known failure as a father or from a father. Dealing with that failure isn’t easy, but thankfully, God’s power helps us to fail in the right direction. This book isn’t for perfect fathers. It’s for men just like you.

Get a free sample

Sign up here and you can download a free chapter from Daddy Tried. We’ll also let you know about new books and albums from Warhorn Media.

Awesome. Thanks for subscribing. Check your email for a confirmation link that will take you to the download page. 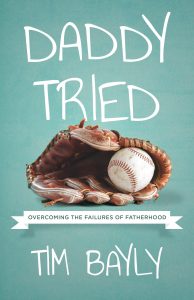 Every father knows failure. It comes with the territory. One generation to the next, imperfect men chip away at God’s original design for daddies, leaving a flawed pattern for their sons to follow. Overwhelmed by their failures, it’s easy for fathers to feel they have blown it for good and can’t redeem themselves.

Within these pages, Tim Bayly offers a frank and hope-filled path to overcoming the inherent failures of imperfect fathers—and to reclaiming manhood and dignity for the man called Daddy. Drawing from decades of his own journey as an imperfect son, father, and pastor, Bayly makes it clear there are no quick fixes. The road to recovery is paved with blood, sweat, and tears, but our Savior walked this path before us.

Daddy Tried makes no apologies for being a book for men. Its subject is fatherhood, and it takes the only perfect Father as our guide. Bayly stares the sins of fathers past, present, and future squarely in the face and clears a path to overcoming them—a path that begins with faith in our heavenly Father who tells us He knows our weaknesses.

WHAT PEOPLE ARE SAYING

“Daddy Tried is the best book on fathering currently in print. This is the book to give to our sons on the verge of becoming fathers. It will clear their heads and steel their spines.”

“I’m here to report: Tim has made me love God’s word more than ever before. Tim has convicted me of carelessness and sin in my own life. And he has prompted me to treasure the memory of his father not less, but ever so much more.”

“Daddy Tried is balm for the soul of every daddy, like me, who fails. Honest, urgent, and faithful, this book brings the Gospel into the home, where it is so desperately needed.”

Order now for kindle or in paperback

For bulk orders, please email us. 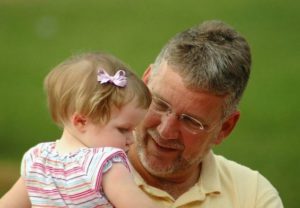 Tim Bayly has been married to his wife, Mary Lee, for over 40 years. They are the parents of 5 children and grandparents to 21 grandchildren. He has also spent almost as much time as a pastor, helping others grow in their walk with God. Through his own personal failures, the faithful example of his father and the firm, loving hand of his heavenly Father, he has learned a thing or two about fatherhood.

The second of 5 boys born to his parents, Joseph and Mary Lou, Tim experienced the childhood loss of two younger brothers to disease and the loss of his older brother in a Christmas night sledding accident when Tim was 10 years old. He grew up hearing his parents say they were never as certain of God’s love as when they walked away from the fresh grave of one of their children. It was this model of unwavering faith in the midst of incalculable loss that would serve to form his own life of fatherhood.

Growing up in the suburbs of Philadelphia and Chicago, Tim recalls one Saturday at the age of 19, when his father quietly said, “Tim, you are not honoring God and you may not live in my home any longer.” Overcome not by the weight of that decision, but by the weight of what his father bore, Tim came to recognize that day as a turning point in his life, understanding the depth to which his father loved him through that decision. It was his father’s love and fear of the Lord that played a pivotal role in Tim returning to the Lord and continuing his journey as a young man of faith.

While in the Presbyterian Church (USA), Tim served on the Board of Presbyterians Pro-Life. Concurrent with his role as pastor of Clearnote Church, he was a member of the Council on Biblical Manhood and Womanhood from 1996-2005, serving as their executive director during the first five years of his membership. Tim also served on the PCA General Assembly’s Ad Interim Study Committee on Women in the Military and was principal author of the committee’s Majority Report received by the 2002 Assembly.

Tim takes his greatest joy from preaching and pastoral care at his home church but also speaks at other churches and conferences from time to time. He writes regularly at BaylyBlog and contributed chapters to Pastoral Leadership for Biblical Manhood and Womanhood (Crossway, 2003, ed. Wayne Grudem, Dennis Rainey) and To You and Your Children: Examining the Biblical Doctrine of Covenant Succession (Canon Press, 2004, ed. Ben Wikner)