When Did Superman Stop Being So Super? 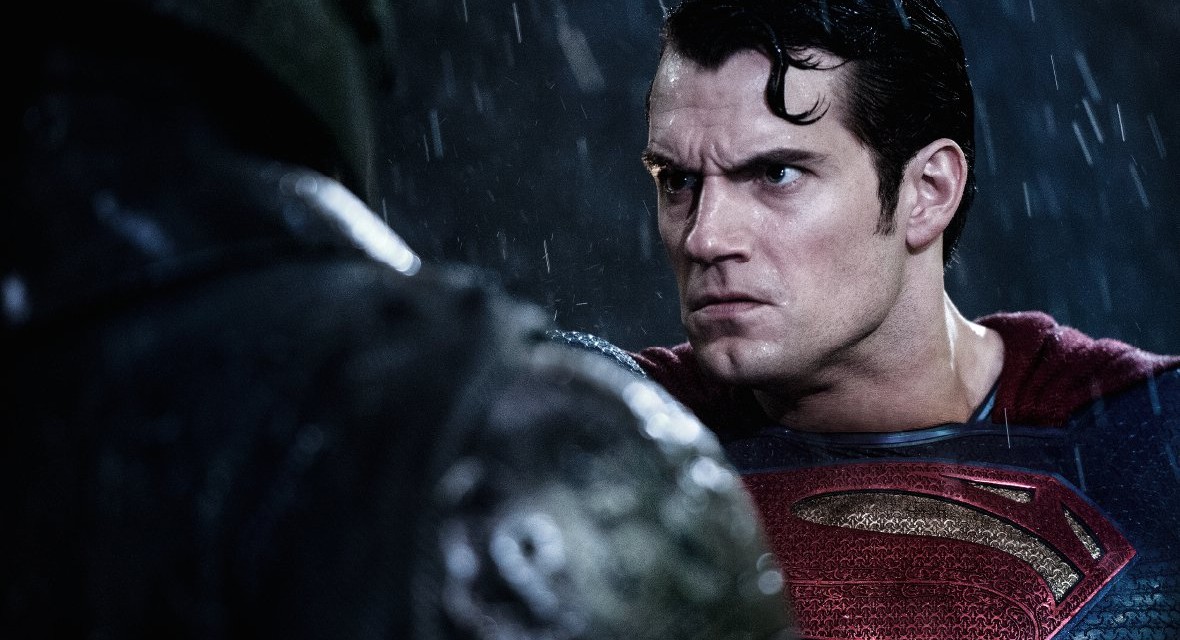 My favorite comic book moment is in Grant Morrison’s All-Star Superman. Superman is dying because Lex Luthor overcharged his cells with solar radiation (don’t ask). In his final days, Superman undertakes a variety of mighty tasks to defeat Luthor, set things right for humanity, and of course declare his love for Lois Lane. In the middle of Superman doing all that Big Important Super-stuff, his super-hearing  picks up a cell phone signal. He overhears a suicidal teenage girl ready to kill herself  because her psychologist missed an appointment. Then this happens: 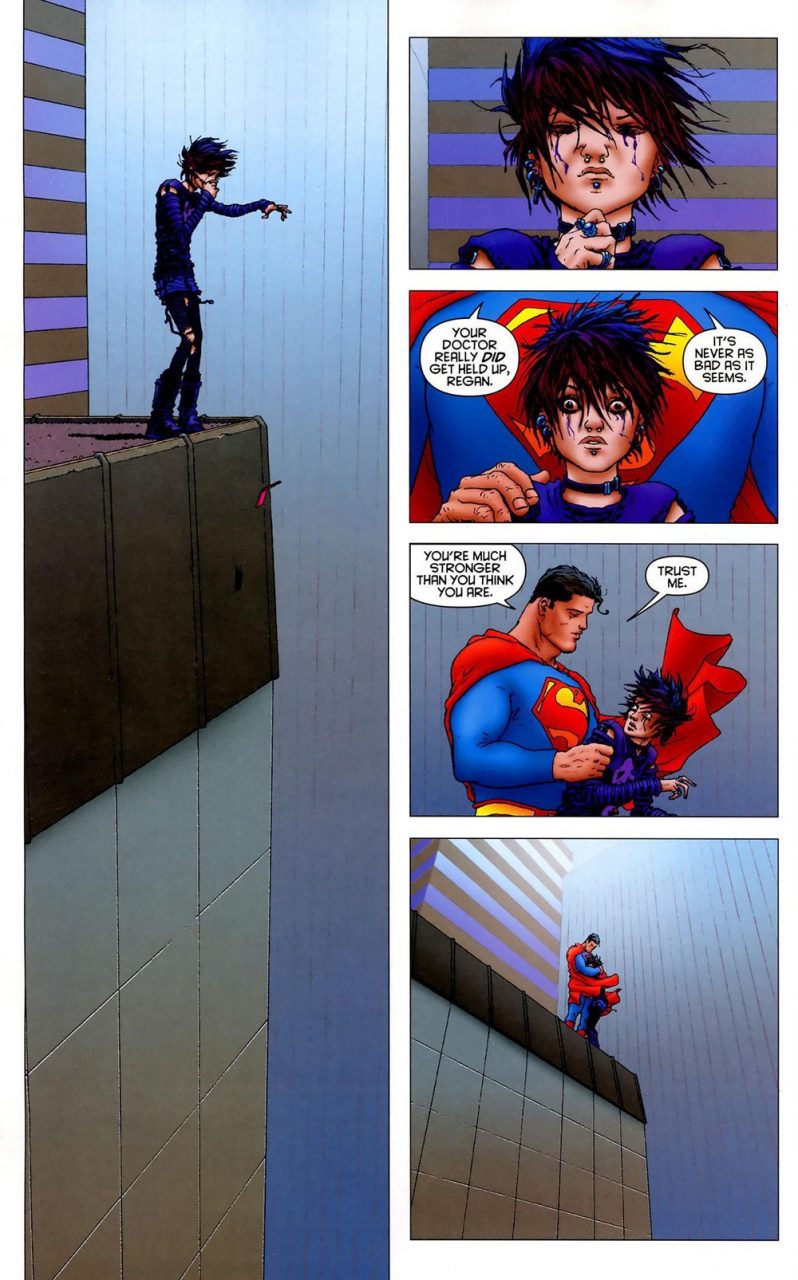 If that doesn’t get you, you’ve got a heart of kryptonite.

If Superman just stopped, say, a giant robot from leveling Metropolis, we’d respect him. But we love Superman when he whooshes back to scoop up the boy standing where the defeated giant robot is about to fall.

Superman would take time out of his busy super day to save one stupid goth girl from herself. That’s who he is.

This answers a question that’s always bothered me about the Superman mythos, which amounts to “if Superman is nearly all-powerful, and Superman is good, why do bad things happen in the Superman universe?” Why is there crime or hunger or war? If you were as powerful and benevolent as Superman, you could remake the world much more drastically than Superman ever does.

Answer 1: Superman stories would be pretty lame if Superman fixed everybody’s problems and nothing bad ever happened.

Answer 2: If Superman spent all his time ending hunger or making sure the sun never died, he wouldn’t have time to save a bus that went off a bridge, or keep poor little Regan from jumping off that building .

Sure, Superman is there to solve our galactic sized problems. But being Superman, he’s also willing to drop everything to save just one person. Really, I wouldn’t be surprised to see him help a little old lady cross the street. And though I’m not saying Superman would be happy to spend his time saving kittens from trees, he’s the superhero I’d be least embarrassed to ask. Spider-Man might do it, but not without a half-dozen quips at my expense. Captain America would give me a look that meant “I have better things to do.” And Batman would just sneer.

Superman was created by a couple of Jewish boys (Siegel and Shuster). There are—not echoes but more like shouts—of the Moses story. The babe in the basket becomes the babe in the space pod, an intergalactic immigrant adopted by a childless couple, who becomes the savior of his people. He is (I don’t think this is too heavy handed) a secular type of Christ. He’s an exemplar of (say it with me, kids) truth, justice, and the American way.  He’s twentieth century pop-Americana’s best stab at making a Messiah.

As such, the great thing about Superman—the reason he’s something more than just another comic book he-man—is that Superman is a daddy.

Seriously, Superman does what  a dad is supposed to do. He’s bigger and stronger than us and he uses that strength to help us. He has compassion for us in our smallness and weakness. If we fall, he’s there to catch us. If someone or something wants to hurt us, he’s there to stand in the way. He’s not afraid and he doesn’t get tired and when we need him, he is there.

Because he’s Superman. Y’know, kinda like your daddy was when you were little.

Problem is kids grow up and instead of finding out that Clark Kent is Superman in disguise, they find out that Superman is Clark Kent in disguise. The man they thought was made of steel is at best a bumbling incompetent. At worst he’s the bad guy.

The only good father is God. There have always been bad dads on the one hand—and on the other hand bad dads that by His Mercy do a little better. Yet somehow when Superman was at his height, from the forties into the late seventies and early eighties when the Christopher Reeves movies came out, everybody believed in the idea of what pop psychology calls a “positive male role model” and what I call a father. At least, they believed in it enough for Superman to act like, well, Superman.

So watch this and tell me what happened.

I cannot tell a lie. I’m excited for it. Nobody does big portentous super-iconography like Zach Snyder. Even the most epic Marvel movie looks like Wagon Train by comparison.

But … where is Superman in that trailer?

That sinister, angry guy that did nothing but glower  from under furrowed eyebrows was him?

What happened? Why is Superman not acting like Superman? Why is he dark and violent and broody? Why is he glowering? Shouldn’t he leave the glowering to Batman?

Remember that terrible awful no-good 2006 Superman movie that you hated? Remember Lois Lane writing an editorial called “Why the World Doesn’t Need Superman”? Why does the new Superman movie think it still has to ask the same question?

These are deep waters, Superfans. This is part 1 of a series we’ll be doing on superheroes and, y’know, us. We’ll be talking about Batman, and also the Civil War between the characters from that other comic company. And also Daredevil and the Punisher if there ends up being anything worth saying about that.

For now, I don’t want to declare that because Americans sons reject their fathers and American fathers reject their fatherhood and everybody rejects the Father God, we can’t believe in Superman. I’d rather imply that without declaring it, which is what I’ve been trying oh-so-cleverly to do.

Look, I know there are still good positive male role models in movies and on TV. Marvel has given us a respectful and mostly non-ironic take on Captain America. And after Superman caused untold collateral damage and death whilst fighting the Big Bad in Man of Steel, the makers of Avengers 2 went out of their way to show the Avengers rescuing as many innocents as they could when Ultron attacked Generica or Clichedvia or whatever that country was called. I’m not calling Doomsday (get it, nerds?) on good Superhero stories.

But we as a people get the Superman we deserve. So before you complain too much about this particular incarnation, you gotta wonder why Hollywood thinks we want him.

Think about that until next time, boys and girls. Here’s a fun montage to ponder by. You can, uh, skip to 1:35 for the part where he rescues the little girl’s cat from the tree.