How to Train a Dragon Slayer 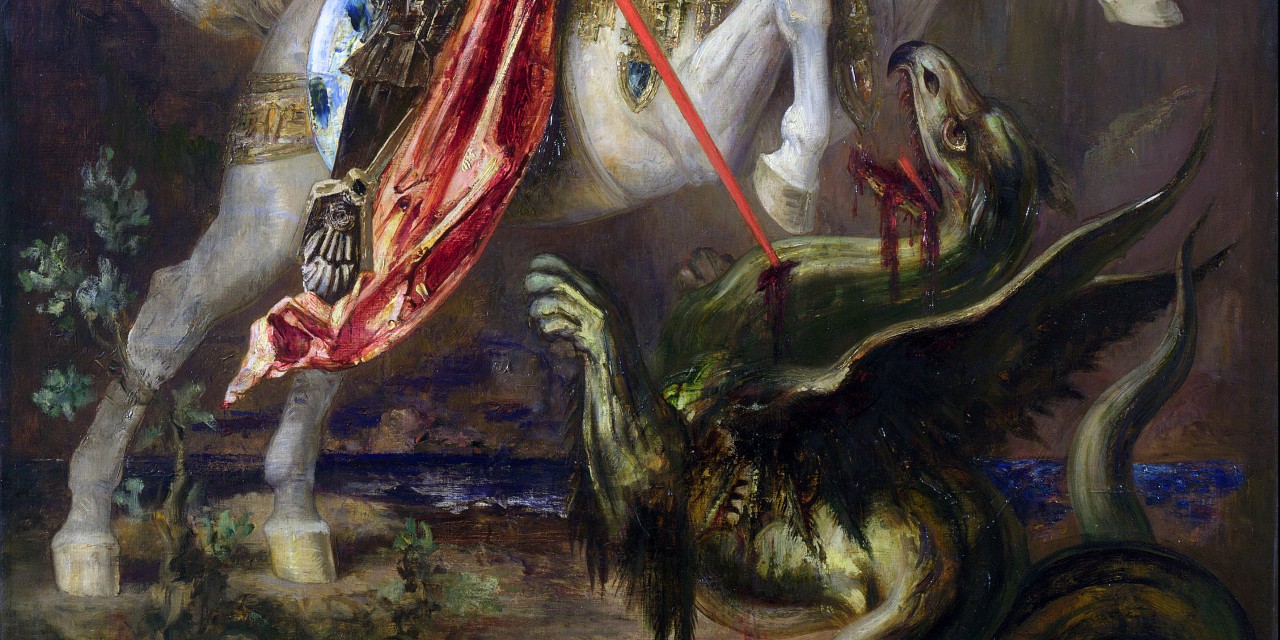 All good dragon slayers start by learning to eat their vegetables. At least, that’s the way we’re training ours.

I’m a campus minister, and one of my favorite ways to explain my work to my kids is by telling them I’m a full-time bona fide dragon slayer. The Word of God is my sword and the strongholds of Satan are my battleground. I work to free my students from the little dragons that have hold of their hearts, and to topple the big dragons that reside within the fortress of Indiana University.

The first rule of being a good dragon slayer is learning to kill your own dragons. For my five-year-old son Peter—who loves to don his helmet and go on the hunt with shield and sword—that means, among other things, eating his vegetables without grumbling.

Now, you’d think my insistence on this first rule for aspiring knights (Eat Your Vegetables) might rob the romance from dragon slaying. But why shouldn’t vegetables have magical properties that transform little boys into brave knights? Peter accepts it as fact. And he’s right to.

This childlike faith, this willingness to happily submit to simple rules that have unseen consequences, is exactly what will make him into the fell warrior he dreams of becoming. It’s what will train him to face down his lusts when he hits junior high. And when he’s amassed victories in hundreds of tiny battles, it’s what will give him strength to face the real trials of being a faithful Christian.

But this lesson is lost on most of us.

As I said, I’m a college pastor. And that means I’m tasked with the job of taking college students and arming them for the battle of life—the battle between heaven and hell, Jesus and Satan, righteousness and sin.

Sometimes this creates problems—especially among the young men. Sometimes when you give a squire his first sword, he’s going to hack at every shadow. Sometimes my students are not as gentle or as skillful as they should be. Sometimes they screw it up.

There are two ways to handle this. You can teach a young man that swords are for keeping in sheaths, or better, on shelves. Or you can teach him to use his sword properly—with wisdom and grace.

Men need to make mistakes. And I’d rather have my men making mistakes while trying to protect vulnerable souls and defend the truth than while trying to polish their swords and sound respectable. It won’t be long before the kind of persecution you read about overseas or in history books won’t seem so unthinkable here and now. When that day comes, the need of the hour will be for men like the ones I’m trying to train.

No, the real problem with all my overzealous squires out to become knights isn’t their zeal. The real problem is that they never learned to eat their vegetables.

Here’s what happens: I tell a young man there are dragons to fight, and it’s exciting. It’s cool. He wants to go out and kick some tail. Should he stand up in the middle of class and preach a Paul-at-Mars-Hill sermon? Should he go to the local atheist meeting and get in an argument? Should he drop out of school and go on the mission field? And what on earth should be done about Planned Parenthood, anyway?

All well and good. But did he read his Bible? Did he pray? Did he look at pornography? Did he do his dishes or leave them for his

roommates? Did he do his homework? Did he say that little thing he knows he needs to say to his roommate about that girl he’s been spending time with?

Unless a man is committed to killing his own dragons—putting his sin to death—he’s just a daydreaming little squire with puny arms and no skill with a sword. A man trains to slay dragons by taking on his own deceitful heart. If he’s unwilling to do that, he’ll never survive an encounter with a real dragon. Real dragons are far too dangerous and cunning.

This is all to say that the only real preparation for faithfulness in big things is faithfulness in small things. Saying the thing that might get you fired or mocked or burned at the stake will sure be a lot easier if you’ve lived a life of sacrifice and self-denial.

And, as I recall, Someone wise once said that only those who are faithful with small things get entrusted with big things anyhow.

This, of course, doesn’t mean a man should shrink from what big challenges God brings across his path. It just means he had better be strong and well-trained if he hopes to survive. After all, when you find yourself standing in front of a dragon, it’s no good saying, “I forgot to eat my vegetables.”